Captain Phillips Based on a True Lie 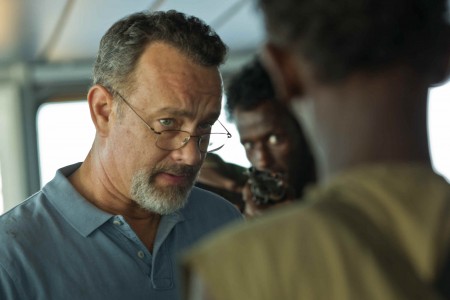 Despite the fact that the film Captain Phillips has received good reviews and that Tom Hanks is said to be superlative in the leading role; there have been some voices raised against the movie. The real crew of the Maersk Alabama have stated that the film in cinemas at the moment is based on a true lie.

While the Tom Hanks film is not the first to be based upon true events, it is the first one to have so many participants of the events in question still around. These other “survivors” have been almost unanimous in their contempt of Hollywoods decision to cast the captain of the ship as a hero.

What is beyond question is that the cargo ship was indeed boarded by Somali pirates in April 2009. Although, the truth of the matter is that the ship was approached twice by pirates. Only one group is mentioned in the film, the other group, like other events in the real incident have been omitted via the auspices of poetic license.

According to one crew member, When Phillips was taken on to captain the vessel at the end of March 2009, the men on board did not like or trust him. He was referred to as arrogant, sullen, and self-righteous. He came to the ship with a “bad” reputation that all were aware had existed for 12 years.

The same crew member, who asked to remain anonymous, said that Phillips ignored the pirate safety guidelines issued by the company that they worked for. He also revealed that no one wanted to work with the captain. The crew members were afraid of Phillips, a man who disregarded the International Maritime Organization’s anti-pirate guidance, almost as much as they were of getting hijacked.

The guidance that had been left on the ship gave detailed instructions on how far from the coastline the ship should be and what to do if boarded. Phillips ignored them all. Even though pirates in the area had increased their activities, a fact that was emailed to the ship, Phillips kept under 300 miles from the coast when the guidelines stipulated that a distance of 600 miles should be followed.

Another crewmember collected the sent emails and collated the data from them. This data showed every ship in the area that had been attacked by pirates. A chart was created showing the names, dates, times, and position when they were boarded and how much ransom had been demanded for each ship. Phillips ignored all the data and continued to maintain that he was not bothered by the threat.

Captain Phillips is, according to the men who lived through the incident, based on a true lie, one that the man has never tried to correct. But, according to his crew the unpopular ship’s captain that they worked for would not have tried very hard.

There are discrepancies between what Captain Phillips reported and what the crew members related. The ship was approached once before the Somali pirates boarded and the crew were undergoing a fire drill during the chase. Phillips allegedly changed course by 180 degrees, which he denied, and when his crew asked about following guidelines, he ordered them to continue with the fire drill.

After the first group of pirates almost caught the ship, one crew member committed mutiny and went below decks to lock himself in until the ship left the area and the threat. When the ship was eventually boarded, Phillips did not follow the proper protocol and his men left him to his own devices. The crew went below deck and followed the company’s guidance to lock themselves away for safety.

The ship’s chief engineer and all of the crew, sans Phillips and three other crew members, locked themselves in the engine room when the pirates boarded. Chief Engineer Mike Perry, actually attempted to salvage the situation by attacking and taking captive the Somali pirate leader and offering to exchange him for Captain Phillips.

Unlike what is shown in the film, Phillips did not volunteer to be shot when the swap went sour. The pirates simply grabbed their leader as well as Phillips and departed the ship. All of them set off in a Maersk lifeboat until the US Navy Seal team caught up with them later and snipers eradicated three of the pirates.

After Phillips’ dramatic rescue, the American press painted him as a hero. The captain wrote a book about the incident and his men noted that he’d altered what really happened when the swap went bad. In the book Phillips said that he volunteered to go, not forced to as his men claim.

Phillips did later say the the portrait of him as hero was an invention of the media. Chief Engineer Perry and third engineer John Cronan gave interviews on CNN stating that the captain had recklessly endangered the crew’s lives and that he seems to have some “perverse desire to be taken hostage.”

Some of the crew cooperated with the film studios in the making of the true “lie” and for that they were paid $5000 and forced to sign a nondisclosure agreement. The agreement meant that they could not speak of what really happened. But the crew members who did not help in the making of the film, have no such restrictions. These men have confirmed that the film Captain Phillips is not based on true events at all. But as they say, it the film’s version that everyone will remember.

One Response to "Captain Phillips Based on a True Lie"