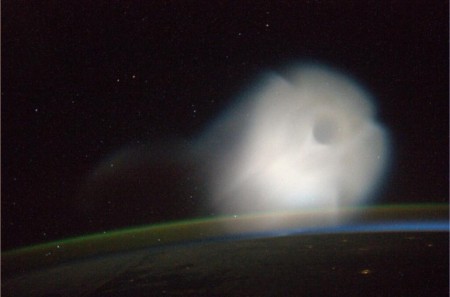 This weekend, an astronaut from Italy, Luca Parmitano, put some very strange photographs upon his account at Twitter which had been taken from the International Space Station. They showed what appeared to be some sort of unknown cloud that was rising directly above the horizon of the Earth at twilight, the types of man-made clouds that usually appear after rockets have been shot off.

What is so weird about this is that there were no planned launches by NASA because of the government shutdown or from any United States commercial spaceflight corporation. Europe and Russia neither one had announced any scheduled launches at that time as well. Nevertheless, there was something that got fired up into space.

Another picture showed what appeared to be a curved trail of a white smoky tail, this being water vapor and exhaust which is made by a rocket going through the atmosphere. There were strange designs created after being pounded by high elevation winds. Then Parmitano showed another picture of the cloud and that seemed to be caused by the rocket crumbling over the Earth.

Mike Hopkins, who is a NASA astronaut, and is stationed on the ISS, also tweeted his observation of the clouds, and stated that he saw something being launching up into space. He said he was not sure what it was but that the clouds it left behind were amazing.

To see some sort of unexpected rocket being launched outside their window had to be unsettling for the ISS team. Did they ever discover what the rocket actually was?

It is believed that Strategic Rocket Forces in Russia had a successful secret trial takeoff of a Topol/SS-25 missile. The rocket was sent up from Kapustin to the Shagan trial area located in Kazakhstan. Conferring to a representative of the Rocket Forces, the experiment was used to check characteristics of the Topol rocket, and to check the systems of the Sary Shagan test site.
This missile is the newest addition to Russia’s military fleet, and it is the first international airborne missile to be developed after the disbanding of the Soviet Union. Intercontinental missiles are used as nuclear weapon delivery systems, and are able to be launched into space and deliver their payloads over thousands of miles away.

According to the Information Telegraph Agency in Russia, various news agencies reported the test was needed to make sure of the stability of the performance characteristics of this class of missile during the extension of its life, preparation of its various measuring systems, and the testing of warheads of ballistic missiles.

The news reports also said the missile test was a triumph, that the practice target they aimed at in Kazakhstan was hit. So it does appear that the cloud encounter was produced by the disintegration of the top part of the Topol’s rocket.

The trouble is that this is a notice to everyone that even though World Space Week had just ended, a festivity which marks the anniversary of the signing of the Outer Space Treaty which banned the militarization of space, that human beings still are testing the transfer apparatuses for weapons of mass destruction, even as the peaceful civilian ISS watch from their windows and can do nothing when they happen to notice clouds of unknown origin coming into existence right in front of their eyes.