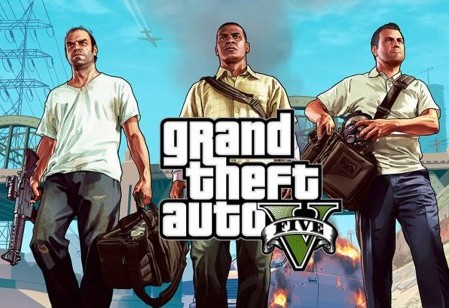 Grand Theft Auto 5 or GTA V was released a few weeks ago and I have to ask “What’s the big deal?” Sure it’s the newest release of one of the, if not the, bestselling video games ever. Already over $1 billion worth of games have been sold and that number is still going up. And supposedly it is the most expensive game ever made, okay I get that. But so what, what’s the big deal? What’s the attraction?

First, I have a confession to make; I have no idea what Grand Theft Auto V is other than it is a video game. In fact I don’t know the difference between GTA V and Petty Larceny 2. You see I am my second half century, my children are grown and gone and my grandchildren are too young to play video games. I don’t own a video console (is that even the correct term?) or have games on my PC, unless Spider Solitaire counts and I don’t spend hours on Facebook trying to crush fruit or candy or something like that. In fact the last video game I can remember playing would have been with my kids and all I remember of that was some little Italian guy wearing carpenter pants who kept jumping off a cliff. True it was my fault he jumped but then it’s quite possible I have made real people do that as well.

Grand Theft Auto 5 is the latest in a series of video games which began in 1997. Developed by a company called Rockstar Games the game was what is called in “2D Universe” meaning you played the game like you were looking down on it, as if in a helicopter or airplane. The basic premise of the game was the player was cast as a small-time crook in the big city who is trying to work his way up the criminal ladder. To do this the player is given various tasks, each one harder than the last and when they are completed the player receives money. When the sum of $1 million was amassed, the player would move to the next level or city in the case of GTA.

The appeal of the game was that it was the first game that ley you stray off the core mission and do other, let’s call them activities. You could machine gun shoppers, run down pedestrians, steal cars and start fires, all fun but in the real world slightly illegal. This eventually caused some controversy throughout the world; the game was banned in some countries and protested in others. A recent article on Pennlive.com referenced below outlines some of these controversies.

Since the first release, each succeeding release has become a little more violent and a little more amoral. The games also went from “2D Universe” to “3D Universe” adding a whole new dimension to the game. While the basic premise of the game remained the same it now felt like the player was right there in the middle of the action. GTA III added new activities such as the ability to open businesses and commit even more crime and debauchery. At the time it was rated as one of the best games ever developed and according to Metacritic is still the second rated PS2 game of all time. Now what a PS2 is I’ll have to check on that later.

Which brings us to GTA 5. Some of the features in the latest version include the ability to play a virtual stock market using real money. Okay it isn’t really real unless you count the fact that if you want you can buy some fake money with real money. Now there is a unique concept. Using your real money you can also buy bonus packs for the game such as cars, guns or various other upgrades. This is a new, potentially lucrative revenue stream for the game companies, which have already been used by the mobile game industry.

Again, what’s the big deal? Sure it’s a big deal for Rockstar since they’ll make the money, but what about the gamer? Why would you want to use real money to buy fake money?

One reason is to beat the game, that’s why. As George Mallory said when asked why he wanted to climb Mount Everest – “Because it’s there”. It is no different with a video game; you want to beat it because it is there to be beat. There is some satisfaction when a player beats a game, it’s a challenge and it is there to be beat.

But there is another reason as well, video games are additive. According to Video Game Addiction.org there is something called “Video Game Addiction” probably where the group got its name. Some of the symptoms include things like spending all off-school  or off-work time on the computer or playing video games, falling grades, falling asleep in school, lying about using the computer and playing games and choosing to play video games instead of socializing with friends. And there are physical problems associated with gaming as well, carpal tunnel syndrome, headaches, sleep problems and back and neck aches to name just a few. Sounds like another addiction to me. While this is not yet recognized by the American Medical Association (AMA) with an actual Diagnostic and Statistical Manual of Mental Disorders (DSM)-IV classification, the AMA is studying it. For these people there is even a group called Online Gamers Anonymous (OLGA). I kid you not. Like all the other Anon groups they have a twelve step program, meetings and support.

And finally did you know that according to the Entertainment Software Association (ESA) 58% of Americans play video games? That’s a lot or gamers. And here is something I wouldn’t have guessed: The average age of video game players is 30 and they have been playing for 13 years. The average gamer spends about three hours per day playing. That’s 13 times 365 times 3 carry the 1… never mind, it’s a lot of time – and a lot of money. I would provide the 800 number but I am guessing if you are addicted you aren’t reading this you are gaming.

Grand Theft Auto 5 is a big deal because it makes money, people want to play it and it takes people out of their normal, boring, uneventful lives and brings them into a world where they are in charge of their own destiny. Sure, it may not be the best example of moral living, but that is up to others to teach. It is escapism pure and simple. Does it lead to violence, crime and general mayhem? Does it lead to serious mental issues? That isn’t for me to say, all I know is this is America and if someone can make money at something then I am all for it.

As for me, I like my normal, dull, boring and uneventful life – and my real money.