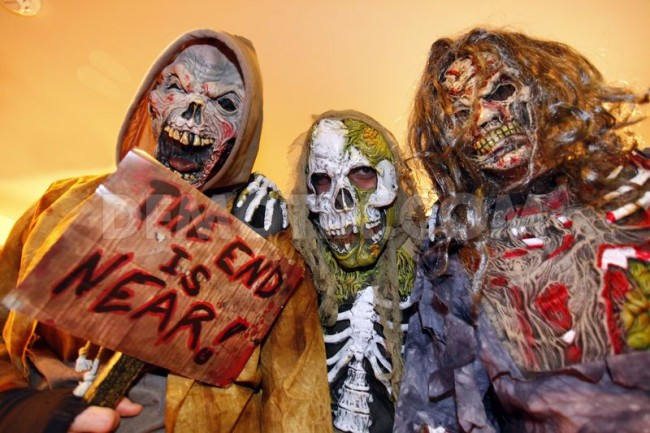 First they came for Christmas now it’s Halloween. Yes it’s true, school districts across the United States have decided your junior zombie can’t celebrate Halloween in their schools. Citing reasons which resemble the contents of a Trick or Treat bag after a night of ringing doorbells, more and more government bureaucrats (aka public school officials) are deciding they know what is best for your children and damn it you better listen.

Here are some of the reasons, in no particular order, it has been decided Halloween  and therefore zombies, should no longer be celebrated in schools:

Citing safety concerns, the regional school district in Cumberland County, PA has decided they will no longer allow students to wear Halloween costumes or have a parade. According to a note sent home to students “they made the decision because ‘safety is a top priority’ for students.” They didn’t offer any alternatives or say exactly what the safety concerns are, just banned the celebration. Interestingly enough the school district also says they allow so called “dress-up days” throughout the year. According to Tracy Panzer, communications specialist with the district, “We recognize that the chance to dress up allows students the opportunity to express individual creativity and imagination. Therefore, we provide dress-up opportunities throughout the year that are tied to instructional components of the classroom.”

Also interesting to note, somewhere along the line the word “Halloween” has been substituted by the more neutral (?) “Fall Festival. One can only wonder on days that are not designated as dress-up days if students attend not dressed.

Then we have another Pennsylvania government official, Orlando Taylor, the principal of Inglewood Elementary School in the North Penn School District, dressing up as the Great Bumpkin and sending home a letter to parents banning Halloween celebrations because of the always popular excuse of “Separation of Church and State.” It seems this particular principal decided to put on his “Chief Justice of the Supreme Court” costume and wrote, “Some holidays, like Halloween, that some see as secular, are viewed by others as having religious overtones. The district must always be mindful of the sensitivity of all the members of the community with regard to holidays and celebrations of a religious, cultural or secular nature. The United States Supreme Court has ruled that school districts may not endorse, prefer, favor, promote or advance any religious beliefs….”

Religious overtones? Religious beliefs? While there is a connection to Christianity and possibly to various pagan religions, Halloween as it is celebrated in schools and by the vast majority of people do not celebrate it for religious reasons. It is used as an excuse to dress up, have fun and legally panhandle. Unless of course, you are in Salem, MA then it is used to generate cash for the local economy. Since there is no church which is promoting these celebrations in our schools, the separation of church and state argument is full of marshmallow chicks.

In 2011 the Buckman Arts Elementary in Portland, OR, banned Halloween going so far as to threaten any ghosts,  goblins and zombies they would run the risk of being sent back home to their coffins. Principal Brian Buckman sent a letter home saying, “For many reasons, the celebration of Halloween at school can lead to student exclusion. There are social, financial and cultural differences among our families that we must respect. The spirit of equity has led most PPS (Portland Public Schools) schools, including most elementary schools, to deemphasize the celebration of Halloween at school.”

Evidently the pumpkins are not letting the witches participate fully at these celebrations leading to this “deemphasizing.”

In each of the examples above the one line which has been repeated like an overdose of Pop Rocks, has been these celebrations disrupt the school day and take away from valuable education time. Evidently this must be the reason US public schools rank so far behind other schools in the world? Even though we spend more money per student than other countries we are only in the middle of the pack. How about instead of trying to make all our students the same and sensitive we actually encourage students creativity and imaginations by allowing them to dress up in costumes?

Wouldn’t this actually lead to more student inclusion and opportunities to teach children? Think of the lessons we all learned from sharing and trading our stash of Snickers and Milky Ways the day after Halloween with each other, and yes, even giving to those who had nothing? Maybe that is the lesson we need to be teaching.

One Response to "Halloween Zombies Banned From Schools"