Hugh Jackman Leaves Wolverine Behind for His Birthday 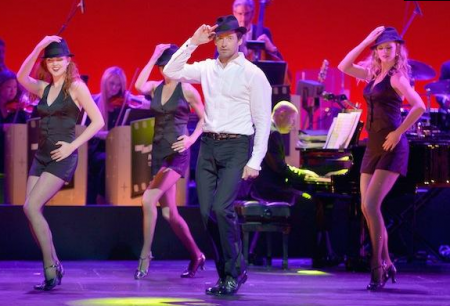 It is a well known fact that Hugh Jackman got his start working in musicals as a song and dance performer. He still cites his role as Curly in Oklahoma! as being a personal favorite and what will always be his idea of career perfection. But it was his being cast as Wolverine in the 2000 film X-Men that made Jackman a household name. But he left Wolverine behind for his birthday bash where he raised a ton of cash for the MPTF.

The 45 year-old star has never forgotten his singing and dancing roots and for his 45th birthday he put on a one man show. He performed his favorite musical numbers throughout the evening, even tap dancing to Singing in the Rain. His show ran for around three hours and he did songs from Les Miserables, The Boy from Oz, Guys and dolls, and Carousel as well as others.

Jackman’s wife Deborah Lee-Furness lead the audience in singing Happy Birthday to Hugh and he sang a tribute to her in the show. He was backed by a 17 piece orchestra at the Dolby Theatre in Hollywood.
The money his one man show raised went to the Motion Picture & Television Fund, a 92 year-old charity that furnishes health care, wellness, social services, child care and retirement services to the entertainment community.

Hugh Jackman left Wolverine behind for his birthday celebration so that he could enjoy himself while earning money for a worthwhile organization.

The actor is a philanthropist who gives freely to numerous charities. Jackman believes in microcredit, which gives small loans to entrepreneurs in poor countries and supports Muhammad Yunus who pioneered the microcredit program.

The Wolverine actor is also a global advisor for the Global Poverty Project and supports both MPTF and The Art of Elysium, another charitable organization that encourages working actors, artists and musicians to voluntarily use their talent to help seriously ill children.

As well as the many charities that he personally supports, Jackman teamed up with Daniel Craig to raise over $1.5 million for the Broadway Cares/Equity Fights AIDS fundraiser in 2009. Of his charitable birthday bash in Los Angeles that raised over $1.85 million, he said that it was his selfish way of getting to sing, dance and tell stories about himself while raising money for a good cause.

The award winning actor explained his affiliation with MPTF in July when he told of his gratitude to theatre, film and television for helping him to succeed in his chosen career. He also said that he was pleased to be able to “give back” to the community via the proceeds of his one-man show.

Jackman’s year has been very busy. He can be seen in Prisoners with Jake Gyllenhaal. He will be in the newest X-Men film titled, X-Men: Days of Future Past and The greatest Showman on Earth. With such a busy schedule it is amazing that he found the time to do his charity show.

Hugh Jackman left Wolverine behind for his birthday so he could sing and dance his way into raising some serious money for charity. Something that the generous star has done before and will most likely do again.