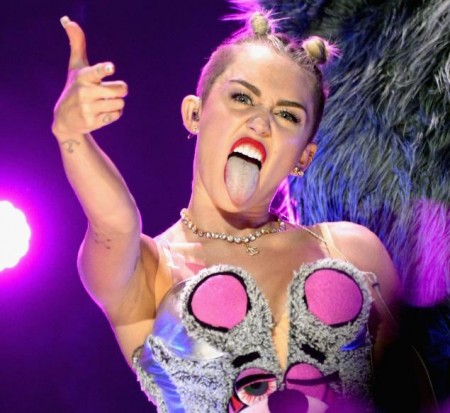 Miley Cyrus had a lot of people speculating about what she would do when she hosted SNL earlier tonight. A well-placed source had reported that Miley would twerk, rip into Sinead O’Conner and possibly even “cross boundaries” because of the late hour of the show. Some fans said she may end up costing the network money because she could perhaps treat the viewing audience to more nudity than we’ve seen already. Instead of pushing limits or crossing boundaries, she hosted the worst episode in recent SNL history.

Firstly, the show was delayed for about a half hour because of a game that ran into overtime. This left fans even more anxious to see what would happen when the episode started. When it finally began we were again treated to Miley’s enormous cow tongue sticking out and she was dressed in her teddy bear outfit from the VMA Awards. Thankfully, her bizarre tongue antics have finally been explained; she said they’re a result of “mini-strokes,” which makes perfect sense since that’s exactly what it looks like when she sticks out her bovine-esque oral appendage.

She then proceeded to appear in a very unfunny skit about a 50 Shades of Grey casting call, doing a bad and boring impression of Scarlett Johannson, which she could not pull off since Scarlett Johannson is a a natural beauty and Miley is a 3 even with makeup.  Miley then gave a humdrum performance of some forgettable song before appearing in an unwatchable skit about cheerleaders being abducted by aliens.

There was a very weird and totally humorless “video” about the government shutdown starring Miley which was a takeoff of her We Can’t Stop video. Many people were undoubtedly pressing the fast forward button, but there was nothing worthwhile to fast-forward to.

Her second song performance was an acoustic version of “We Can’t Stop,” which was at least different than than the norm; some reviewers called it “poignant,” but they are obviously more fond of Ms. Cyrus than the thousands of folks who have been growing increasingly disgusted by her antics.

There were a couple of skits which produced no laughs whatsoever, and it became apparent that Miley Cyrus is no actress. The show mercifully ended with the cast hugging and congratulating Miley. There was no twerking, no ripping up any pictures or ripping on Sinead, no nudity and nothing controversial whatsoever. Miley was also dressed a lot more conservatively than she has been in recent performances.

There’s one caveat to this dreadful review, though, and that’s the fact that the lackluster epiosde wasn’t entirely Miley’s fault. In fact, the new cast members were not very good at all, and were so unfunny that they seemed to be dragging the rest of the more seasoned cast member down with them. The show, overall, might be in trouble. So, while Miley Cyrus hosted the worst episode in recent SNL history, it was only partially because she gave us her normal talentless offerings.