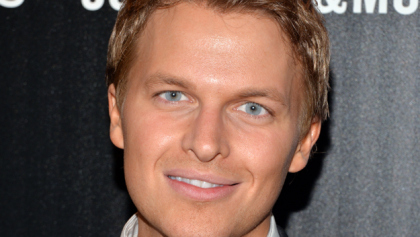 Speculations of  Ronan Farrow’s real father does make one think of the 1968 spooky thriller, Rosemary’s Baby, in which Mia Farrow was cast. It’s almost eerie to picture Farrow, walking slowly towards the black veiled bassinet, only to reveal the baby is Woody Allen’s but happens to look like Frank Sinatra.

But is it possible? Mia Farrow divulges that while she and Allen were still together, she and Sinatra “Never split up.” Both Farrow and Sinatra were married for two years and divorced in 1968.

When the question of paternity was posed to Ronan, he was witty in Tweeting, “We’re all ‘possibly’ Frank Sinatra’s son,” which is something Woody Allen would have said but in a whinier voice while shrugging both shoulders.

Mia Farrow, 68, does not seem bothered by any scandals concerning Allen. Her time is best spent in her most important role as a philanthropist in war-affected countries.  She is a Goodwill Ambassador supporter for children’s rights. Her charitable works have kept her busy with travel as she blogs about her adventures while abroad.

Ronan Farrow, 25, is an attorney and freelance journalist who also served as a government official in the Obama Administration. Like his mother, Ronan is also a human rights activist and has written about the issues children face in war-torn countries. It is not known whether Ronan saw Farrow’s performance in Rosemary’s baby or not.

Because of Woody Allen’s past transgressions, the chance that he might not be Ronan’s father is one that would most likely be welcomed by Ronan. Allen was heavily criticized and shunned by Farrow and their children for ending the relationship with Farrow and becoming romantically involved with their adopted daughter, Soon-Yi. Allen is no longer a welcome person in her life as well as her children’s. On one Father’s Day occasion, Ronan had Tweeted, “Happy Father’s day — or as they call it in my family, happy brother-in-law’s day,” an obvious shot at Allen’s union with Soon-Yi.

Frank Sinatra’s widow, Barbara Sinatra, 85, responded by saying the claim of Sinatra as Ronan Farrow’s father is, “Like a phony to me.” She is in full denial of the paternity claim and believes that the claims are lies. Barbara was Sinatra’s fourth wife.

Allen’s camp offers their reply in saying that the claims are Farrow’s speculation and his camp further states, “The article is so fictitious and extravagantly absurd that he is not going to comment.”  The only way to put rumors such as these to rest is DNA test.

It is strange that the word “possibly” ruffled so many feathers. Farrow didn’t admit to it and would not know unless Allen agreed to do a DNA test; however, DNA test or not, Ronan’s features, right down to his smile hardly resembles Mia Farrow, let alone Woody Allen. The pictures of Ronan are rather uncanny as some of them have been put side by side to compare and it actually confirms the biological connection to Sinatra. Though Mia Farrow endured movies like Rosemary’s Baby, it is true that Ronan will never forget what he and his siblings endured while living with Allen.