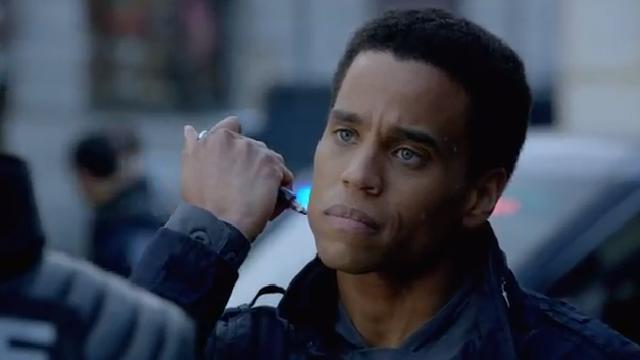 The heavily promoted show, from the creator of Fringe, begins its two-night premiere at 9 p.m. ET/8 p.m. CT on FOX. The show takes place in Los Angeles in the year 2048, where drugs and crime is at an all-time high. The police force is being outnumbered by criminals, and is burdened by how fast technology and science is evolving. So, the police department comes up with a solution: to pair a cop up with a programmable cop, called MX-43.

The show stars Karl Urban, better known to fans as Bones from the Star Trek movies, also directed by Abrams. He portrays LAPD detective John Kennex, who wakes up from a coma 17 months after an ambush killed his squad and he end up losing a part of his leg. He then gets partnered up with an android called DRN played by Michael Ealy, who has been in such films as Seven Pounds and Think Like a Man. DRN is named Dorian, and is more human-like than the MX-43s, because DRNs are programmed with a “synthetic soul” that helps them process human emotions.

There is considerable hype surrounding the show, being produced by Abrams. Not only has he successfully directed the reboot to Star Trek, but he followed up with Star Trek: Into Darkness, grossing over $228 million. In addition to Almost Human, Abrams has executive produced such shows as Alcatraz, Felicity, Person of Interest, and Lost. He has also directed Mission Impossible 3.

This will be a big deal for FOX, as the network is launching its second sci-fi series, with Sleepy Hollow premiering in September. While that show has been doing well, averaging 7 million viewers, other sci-fi shows the network had launched have not fared as well. Alcatraz, about the famed prison, and Terra Nova, about a family in the year 2149 who must travel back millions of years, both only lasted 13 episodes.

Fox has been heavily promoting Almost Human through commercials and social media and the series was originally scheduled to premiere on November 4th. But, on October 21st, FOX pushed back the premiere two weeks to November 17th and 18th, leaving reporters confused by the sudden change. Executives explained that by pushing Almost Human back two weeks, it will be a part of the Sunday double-header football games and that Sleepy Hollow would be able to return after being on hiatus due to baseball. After its two-night premiere, Almost Human will then move to its regular slot at 8 p.m. ET, right before Sleepy Hollow. They will move Bones, which is in the current 8 p.m. slot, to Friday nights starting next week.

Fox is hoping that with promoting Almost Human and the success of Sleepy Hollow, they can grab the top spot in ratings on Monday night. Last Monday, ABC took the top spot in ratings, averaging 11.7 million viewers, which counts live watching and people who watch on their DVR the same night. FOX came in third place, averaging 7.2 million viewers. More importantly, in the 18-49 demographic, FOX was in second place to NBC with a 2.3 rating to NBC’s 3.5.

Almost Human can be a big hit for FOX or another casualty.

One Response to "‘Almost Human’ Premieres Tonight on FOX"