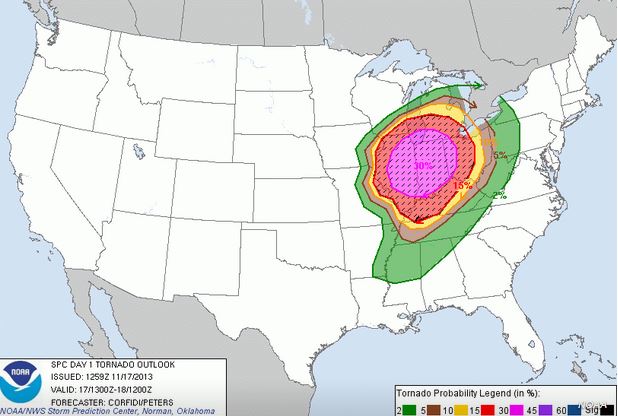 When the weather warms for the Midwest during November, trouble is sure to follow. Sadly, many parts of Illinois are experiencing horrible storms, resulting in damaging tornadoes. The first reported tornado was reported at 11 a.m. near East Peoria, Illinois. In addition, tornadoes have touched on the communities of Washington, Morton, Metamora and other central parts of the state. In their wake, houses have been destroyed, cars overturned and officials are scrambling to determine any levels of injuries and damages. In the meantime, the storms are trailing east and in its path are Ohio, Michigan, New York, New Jersey, Pennsylvania and more are being warned to stay alert.

The National Weather Service is faulting the levels of atmospheric instability leading to strong winds and tornadoes. The weather agency has live maps on their site to track parts of the storm, as social media is exploding with the news of several tornadoes. Reports coming in show there is an interruption in cellular communications for many – resulting in severed communications between families.

Tornado sirens sounded in the late morning in parts of Illinois, catching Church-goers off guard. Sports fan attending the Bears games were advised the game had been suspended and many fans took shelter around the arena. The pictures say a lot more than words and it is highly cautioned for those in the path of the storms to take stay alert and continually be aware of any new updates. Areas of Ohio and Michigan are already reporting higher gusts of winds and dropping temperatures.

Currently, officials have no word on potential injuries or the extent of damages. Users have submitted pictures to many news outlets advising of the damages. It is urged by all residents to take immediate shelter once a tornado watch is issued. Avoid all windows and take shelter in the basement, bathtub or a sturdy doorway. For others, if there is not an immediate need to leave the house, it is advised to stay in and avoid highways when strong winds are reported.

Illinois has reported a multitude of tornado strikes throughout the state, and the National Weather Service is urging states in the Midwest and East coast to keep alert. If taking a flight from the Midwest or East Coast, be sure to check with your airline to determine if the flight has been delayed or canceled until the weather settles down.