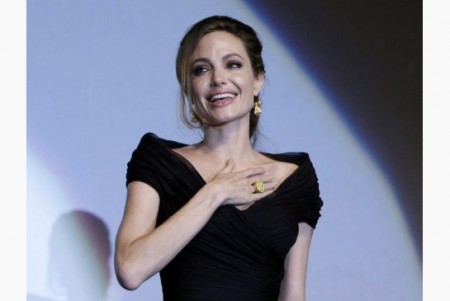 Once again Angelina Jolie will demonstrate how horrible her acting is in her upcoming movie ‘Maleficent’. The movie ‘Maleficent’ is said to be released May 30, 2014. This movie takes a darker look in to the Disney movie ‘Sleeping Beauty’. Maleficent herself tells the story of why her heart grew colder and the reason behind cursing young Aurora. The trailer for this movie can be seen below.

Jolie is known for many movies including ‘Mr. and Mrs. Smith’, ‘Lara Croft: Tomb Raider’, and ‘Gone in 60 Seconds’. Angelina’s fan base plummeted when the public found out she and Brad Pitt were intimate while Pitt was still with Jennifer Aniston. This love affair occurred back in 2004 through 2005 but the couple was not public about their romance until the beginning of 2006. Rumors of Jolie and Pitt kindling a romance while filming Mr. and Mrs. Smith filled magazines. Although the two claim they became a couple after Pitt and Aniston split-up, new evidence was revealed earlier this year that claims different. According to Jolie’s stunt double, Eunice Huthart, the media tapped in to private conversations between her and Ms. Jolie. Once they obtained the information it immediately went to print leaving the public to see that the rumors were in fact true.

Even before the cheating scandal, Jolie’s acting wasn’t the greatest. In 2001 the actress starred in ‘Lara Croft: Tomb Raider’. Her performance as Lara Croft did not impress her audience. There was even a list created stating the top 10 actresses to replace Jolie that would fit the Lara Croft’s character more appropriately. A few of the actresses chosen were Kate Beckinsale, Anne Hathaway, and Jessica Biel. Though their athleticism wasn’t taken in to consideration, these actresses would fit every other character aspect that Lara Croft has.

Another movie Jolie’s acting didn’t excel at was ‘Gone in 60 Seconds’. The only thing that was said to stand out about Jolie in the movie was her big hair. Her performance in the movie was not anything admirable. Her acting has been overall average throughout the years. Although this actress does well with charities, her reputation and acting are still things that need improving.

The upcoming movie ‘Maleficent’ will be the first movie in 2 years that she will star in. In the movie trailer, Jolie demonstrates some characteristics as Maleficent but she isn’t quite right for the part. Maleficent does have high cheek bones which Jolie possesses as well but the problem is she looks like a walking skeleton. For years Jolie has been criticized for being too thin and possibly having an eating disorder. After all this time it seems the actress still has a problem with her weight.

Recently Jolie did have breast cancer that was removed which could play a big role in her weight. Thankfully she is fine and ready to start her career up again. It is a shame that she would be chosen for a role in one of the most beloved, classic Disney movies on account of her horrible acting performance. This movie will either make her or break her in the eyes of her fans. The public remains hopeful that Jolie will do a good job at portraying Maleficent but only time will tell.