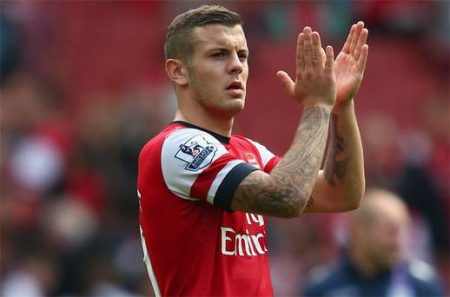 Arsenal got a vital win thanks to a brace from Jack Wilshere to ensure a 2-0 win over Marseille to take Arsenal Football Club of England to within viewing distance of qualifying for the knockout phase of the UEFA Champions League.

The performance wasn’t exactly an advertisement for the group stages of the UEFA Champions League. Neither was it Arsenal’s best performance but most importantly, they got the win which they started out to get. It was even more important considering Dortmund had won their match and the last match is an away trip to Napoli which is not the easiest of European venues.

Not since the days of Henry, Pires, Bergkamp, Wiltord and the likes in the ‘Invincibles’ era have the gunners dispatched teams with so much confidence. Even when the passes aren’t quite connecting or the free flowing passes quite stringing together, they seem to get the win which is a vital sign of champions.

Arsenal only now need to avoid a three-goal defeat away to Napoli in Italy in their final group F game to reach the knockout phase. It would have been an even better story for the gunners had Napoli managed to get a result against Dortmund but that was always a daunting task in Germany behind the yellow wall which is as much a fortress as you’ll find in European football. Had that been the case Arsene Wenger’s men would have been in the last 16 by now.

Wilshere scored both sides of the half time whistle to give Arsenal the three points. The first is one of the fastest goals ever scored in the Champions League. He was released on the right hand side by Bacary Sagna and he simply ran into the box and found himself with a lot of space. He still had a lot to do and he showed good composure and technique to curl in a beautiful left foot finish. Aaron Ramsey had the chance to put Arsenal two up but had his shot saved by the Marseille goalkeeper after had been squared in by Wilshere. Marseille were kept at bay and could only manage a whimper at their most threatening first half moments but Arsenal keeper Wojciech Szczesny still had to be alert to save at Andre-Pierre Gignac’s feet when the ball broke to him. He was probably even more shocked than most to have the ball at his feet after he had managed to wriggle through two defenders. Ozil, who had a bad day at the office by his standards, could even have the luxury of missing a penalty without the team paying for it.

Arsenal fans had their nerves calmed midway through the second half when Wilshere added a second for himself and the team when he side footed home beautifully from Mesut Ozil’s pass.

Florian Thauvin threatened the Arsenal defence after he was brought on. First, the Arsenal left back had to clear off the line from his deflected shot and then the goalkeeper had to save smartly and his near post. It was however too little too late and his team mates did not show as much promise to really give Arsenal that much of a scare.

Arsenal survived and hung on well enough to get a vital win and be just at the edge of a place in the last 16 of UEFA’s top premier club competition.