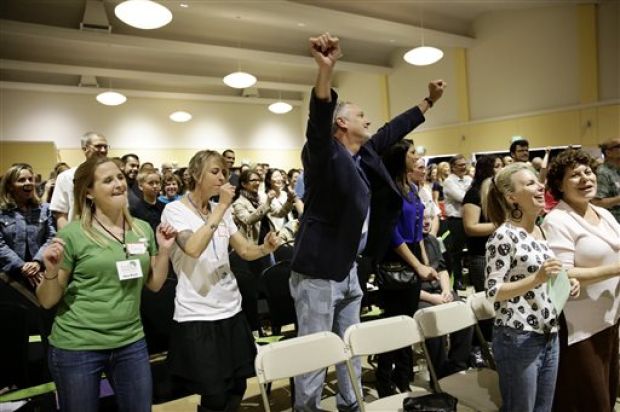 New mega churches are on the rise where everyone is invited but God. No longer are Christians the only ones entitled to mega-sized churches.  Atheist gatherings are blossoming all across the globe.

Dozens of gatherings called “atheist mega churches” by detractors and supporters are springing up within the United States and Australia; with the promise of more to come.

The concept found grave success in Great Britain earlier this year and is quickly multiplying world-wide. This movement was fueled by social media and started by two well-known comedians of British descent. The irony in it is this church may have been instituted by two comedians but it surely is not a joke.

People by the droves gather in attendance at a newly established mega church in Los Angeles location; the only difference is they are godless. This godless congregation is spearheaded by Pippa Evans and Sanderson Jones; two British comedians.

This British duo is currently on tour to raise funds in order to launch new Sunday Assemblies. Their goal is to raise in excess of $800,000 to help atheists start congregations in their local areas. They have already raised close to $50,000.

The buzz for this new style Sunday fellowship is sounding from London to Los Angeles. It’s called Sunday Assembly and it began January 2013 in London. It has thrived in popularity ever since.

The congregation, much like Christian mega churches, consists of people who are searching for a place to fellowship with like-minded people; they just happen to be atheist.

For anyone looking in from the outside it appears to be the typical Sunday morning gathering that you’d find worldwide. There are hundreds of people; including families and children joining together in song, meditation, testimonials, a sermon is heard and standard readings are shared. It has all of the elements of a typical church service except God.

The scriptures say that God is everywhere; so he may very well be there but he definitely isn’t an invited guest.

They don’t gather in order to bash Christians; they just want a way to meet people who think like they do. They intend to become active in the community and make themselves known in a world that’s dominated by people of religious faith.

The motto for the Sunday Assembly fellowships is “Live Better, Help Often and Wonder More.” They pride themselves on being a godless congregation that chooses to celebrate life. Sunday Assembly’s mission is simple; help people find their purpose and fulfill their utmost potential.

This atheist church taps into the heart of people who no longer believe in the God of the church but who miss the community culture that church provided for them. It also feels the need that many atheists have for being more visible within the community.

According to Phil Zuckerman, a professor of secular studies at Pitzer College in Claremont, within the United States there seems to be a feeling that if you’re not religious, there is absolutely no way you could be patriotic.

However, secular people feel like nothing is further from the truth. Atheist say they are good people, great parents, and charitable souls; just as good of citizens as the rest of the world. They said they’re starting a church movement to prove it.

Sunday, November 10 in Los Angeles, California hundreds of atheist and other curious people jammed into an auditorium for an energetic service complete with live music, inspirational talks and moments of reflection.

The talks that filled the air were about important, but often forgotten, scientists and inventors sprinkled with portions of standup comedy.

Congregants clapped their hands, stumped their feet and cheered loudly as they were led through rousing renditions of Lean on Me, Don’t Stop Believing and Here Comes the Sun. These songs were substituted for traditional gospel songs that Christian churches are familiar with.

Attendees played a get-to-know-you game in order to become better acquainted with fellow atheists. Multiple people shared with the audience, in a testimonial format, about service projects they’ve started with in the Los Angeles community.

At the conclusion of the service volunteers were on hand to pass out containers for donations as the congregants fellowshipped with each other over pastries and coffee; while the children played together.

Atheist mega churches are on the rise where everyone is invited but God. No longer are Christians the only ones entitled to mega-sized churches. In Los Angeles the new Sunday Assembly drew several hundred people together bound by their non-belief in God. These same type churches have began to blossom all across the globe.

6 Responses to "Atheist Mega Church Welcomes Everyone Except God [video]"