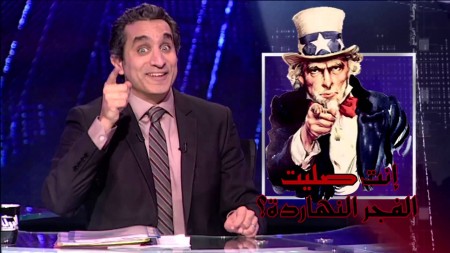 Minutes before the 10pm airtime Friday in Egypt, CBC network pulled the Bassem Youssef show. Instead, viewers saw a statement that there were contractual and content issues. This was the networks response the first show, which aired last week, kicking off his third season. The Bassem Youssef show is a satire show on political topics modeled after Jon Stewart’s The Daily Show.

In the episode, Youssef criticized Morsi’s administration, examined the actions of the current government and taunted the army chief, General Abdel Fatah al-Sisi.

Youssef said “I definitely do not support the people who attacked us, accused us of heresy, had the gallows ready for us, and publicly demanded our arrest,” but also, “at the same time, I don’t support the hypocrisy, deification, pharoahisation and the repetition of the mistakes of the past 30 or even 60 years.”

The direct attack on the current leaders, General Abdel Fatah al-Sisi and the military, created enough controversy for CBC to issue a public statement distancing the network from the statements Youssef made.

This week, the CBC broadcaster, on behalf of the board, stated “CBC will continue to be supportive of the basics of national sentiment and popular will and is keen on not using phrases and innuendos that may lead to mocking national sentiment or symbols of the Egyptian state.”

One thing is clear: CBC is not keen on freedom of speech. This is not rare in the broadcasting world, even in the US. In 2002, Bill Maher’s show, Politically Incorrect, was kicked off air by ABC network for his statement that grossly compared American politicians with Al Qaeda.

“We have been the cowards, lobbing cruise missiles from 2,000 miles away. That’s cowardly. Staying in the airplane when it hits the building, say what you want about it, it’s not cowardly.”

Now, Bill Maher airs on Real Time With Bill Maher, on the HBO network where he says what he wants. However, that option may not be possible for Bassem Youssef.

Friday morning, Bassem Youssef flew to United Arab Emirates. It has not been confirmed if the trip was directly related to the cancellation of the show.  It is clear that Youssef knew a backlash would follow because he taunted censorship in his last broadcast. “Nobody will tell us what to say. We shall say what we want.” Then he jokingly pulled a new script from inside his desk, which would replace the current one. Hopefully, that will be the case because viewers of the program tune in for his honest satire.