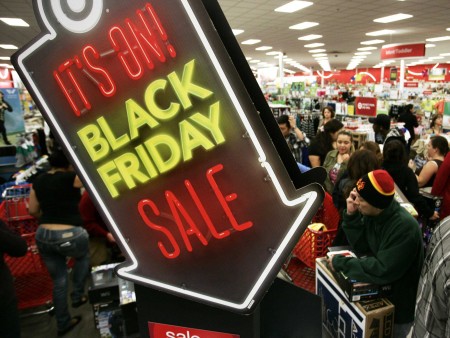 Like many other American “traditions” Black Friday has come to the United Kingdom and the PS4 Launch started at midnight in Game stores across the country coinciding with the “new” marketing tradition. While many publications in the UK have questioned the wisdom of English retailers aping American stores and their “official” Christmas shopping period, gamers came out in force Thursday night to line up for the Sony next gen console launch.

In Norwich, England gamers chatted amicably and enthusiastically accepted freebies from the retail staff who “worked the queue.” Gifts of appreciation included mini chocolate bars; gift-bags; Battlefield 4 dog tags and Batman Arkham Origins T-shirts. Though the line of excited consumers stretched quite far along neighboring store fronts of the city center shopping area, movement was fairly quick. Over a hundred people waited to get in the store to pick up their next-gen Sony gaming console.

This number of Sony fans wanting to be among the first to own the new console may seem quite small, but, these numbers, when combined with other towns and cities who participated in the midnight launch’ equates to a lot of gamers who purchased the PS4 in advance.

Somewhat amazingly, the only line outside the Game store was for those who had prepaid for their consoles. No one showed up “on the night” to purchase the newest offering from Playstation. The shop staff had obviously learned how to work the crowd from their earlier launch of the Xbox One. The Microsoft launch, which did not have the advantage of being timed to occur alongside Black Friday, apparently had a much shorter line of people according to the employees handing out free goodies.

One item that was given out was Game’s Black Friday leaflet which advertised “Five Days, 20 Epic Offers.” This enthusiastic offering; based on the American tradition of the Friday after Thanksgiving being the official start of the Christmas shopping season is not limited to the gaming retailer. Although the PS4 launch obviously had its own hype despite being timed to start on Black Friday in the United Kingdom the deals had to do with last-gen game offers.

The reaction from the British public, and writers for various newspapers, has been mixed. Some have gone on record saying that this American “gimmick” will not take hold in the UK where the hook of Thanksgiving does not exist. Asda, owned by the American retail giant Walmart, has surged into the lead in marketing the price slashes of the English Black Friday. Despite some cynics stating that this new marketing strategy is doomed, other have revealed that at least one in three consumers will be partaking in the savings on offer.

The American owned retailer is excited about copying the stateside shopping tradition. Their mother company made huge profits from last year’s Black Friday and they expect to do the same this year. Even the news that more Walmart employees will be striking this year on the day has not discouraged the US retailer who expects to have similar profit increases this year.

Asda expects to benefit from this marketing practice and they have launched an advertising campaign that is intended to increase their flagging sales figures in 2013. As well as Game opening at midnight to hand over prepaid PS4 consoles, Asda also opened at the witching hour in order to show their customers that they could they save by shopping at their stores and that they intended to cater to their consumers needs.

Walmart’s English offspring is not alone in taking advantage of this shopping bonanza. All across Great Britain retailers as diverse as the “upmarket” John Lewis department store and the online shopping giant Amazon have promised English shoppers savings of up to 70 percent. So far, it seems that the average consumer is prepared to take advantage of this new shopping trend and if the stores make enough profit it could reappear next year.

It does seem as though retailer’s may have a “win-win” scenario with their introduction of Black Friday marketing. The PS4 launch that started at midnight in the United Kingdom went down well and people were well behaved in the line outside the store. These polite and respectful gamers pretty much destroyed the media image of video game enthusiasts being violent and antisocial.

It is extremely doubtful that shoppers who head out to the shops in the UK that are participating in Black Friday during regular shopping hours will be that well behaved. Retailers have already been cracking the whip on any employee who dares to exhibit negative feelings about this new “sales gimmick.” Although stories have been circulating about old “grannies” beating up the competition while rushing to take advantage in the price slashing.

Black Friday started “officially” at midnight with the PS4 launch at the United Kingdom’s Game stores and other retail outlets who opened in order to fulfil the gaming community’s needs. Whether or not this welcoming of an essentially American marketing ploy, built around the Thanksgiving Holiday, will be repeated comes down to the profit realised by shops who participate. Regardless of the fact that England does not celebrate the uniquely American holiday, retailers know that shoppers will rush to take advantage of huge savings. It is, after all, about the profit and not the tradition.