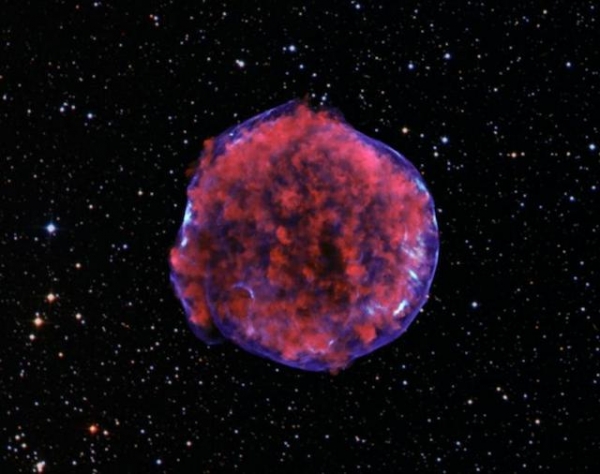 Astronomers from the Harvard-Smithsonian Center for Astrophysics have recently explained that a reverse shock wave in Tycho’s supernova remnant, travelling at Mach 1000, is responsible for making the particles “glow.”

When a star dies it explodes as a supernova, releasing a burst of radiation and becoming extraordinarily luminous. The matter emitted is expelled at phenomenal speeds, typically in the tens of thousands of kilometers per second, with velocities reaching as high as 10 percent of the speed of light. This, in turn, drives a shock wave into the interstellar medium that culminates in a breathtaking supernova remnant.

A supernova remnant is a diffuse, expanding nebula, comprising of ejecta from the explosion, as well as interstellar material swept up by the shock wave of the exploded star. After hundreds or thousands of years, the material continues to glow, displayed as a majestic supernova remnant.

Researchers have recently studied Tycho’s supernova remnant, concluding that the reverse shock wave – racing inward at 1000 times the speed of sound (Mach 1000) – is responsible for heating the remnant and triggering the emission of X-ray light.

Hiroya Yamaguchi, who conducted the study at the Harvard-Smithsonian Center for Astrophysics (CfA), briefly discussed the significance of the reverse shock wave, during a recent press release:

“We wouldn’t be able to study ancient supernova remnants without a reverse shock to light them up.”

Tycho’s supernova (SN 1572) was originally discovered by astronomer Tycho Brahe in 1572. At its most intense, the supernova is said to have rivaled the brightness of Venus, before its visibility faded around a year later.

The structure was a Type Ia supernova, located in the constellation Cassiopeia, and resulted from the explosion of a dwarf star. The dwarf star was a part of a binary star system and began accreting matter from its companion star. This accretion continued, until it reached the maximum mass of a white dwarf star (i.e. the Chandrasekhar limit); at this point, the white dwarf exploded.

Evidence seems to implicate a G2 star – similar in nature to our Sun – in contributing mass to the dwarf star, thereby causing its spectacular supernova. Although contentious, it is posited that the supernova resultantly stripped away some of the mass of the star, increasing its velocity to more than three times that of neighboring stars.

Phases of the Supernova Explosion

During the initial explosion, a shock wave passes through the stellar material and continues to expand into the interstellar medium; this triggers a shock wave in the interstellar gas that pushes it outward, alongside a reverse shock that travels back into the supernova ejecta. A process of “free expansion” typically lasts a few hundred years, depending upon the density of the surrounding gas.

The next phase of the process is called the Sedov-Taylor (a.k.a. Adiabatic) phase. Eventually, the shock wave sweeps up enough material, from within the interstellar medium, that free expansion becomes impeded.

Once the mass of the swept up ISM reaches that of the ejected material, Rayleigh-Taylor instabilities arise, just behind the shock front – the “contact surface” between the ejecta and the swept-up gas. This creates an instability that imposes strong convective motions, mixing the shocked interstellar medium with the supernova ejecta, and enhances the magnetic field within the supernova remnant shell; this process is reported to last anywhere between 10,000 to 20,000 years.

The final “radiative phase” involves continued cooling of the shock wave. Once temperatures plummet below 20,000 Kelvin, electrons start to recombine to form heavier elements. In helping to propagate heavier elements, supernova remnants are thought to serve as major players in the evolution of galaxies.

In studying Tycho’s supernova, researchers have established that the outward shock wave continues to travel at Mach 300. Meanwhile, the violent backwash is currently speeding inward at Mach 1000. One of the study’s co-authors, Randall Smith, explains the nature of this shock wave:

“It’s like the wave of brake lights that marches up a line of traffic after a fender-bender on a busy highway.”

The reverse shock wave heats the material inside the supernova remnant to millions of degrees Kelvin. The researchers describe the process as being akin to that which lights up a fluorescent light bulb, where a filament wire is heated to high temperatures until it glows. However, whereas light bulbs emit visible light, supernova remnants release electromagnetic radiation in the form of high-energy X-rays.

It is the reverse shock wave that permits astronomers to study the supernova remnant, hundreds of years after the explosion has taken place. Yamaguchi and colleagues used observations collected from the Suzaku spacecraft – a Japanese X-ray satellite, launched during 2005 – to study the afore-mentioned X-ray emissions.

The group intend to study other young supernova remnants, in an attempt to find evidence of similar reverse shock waves and gain a better understanding of how they work.