SpaceX Delays Launch of Falcon 9 Rocket Due to Technical Glitch 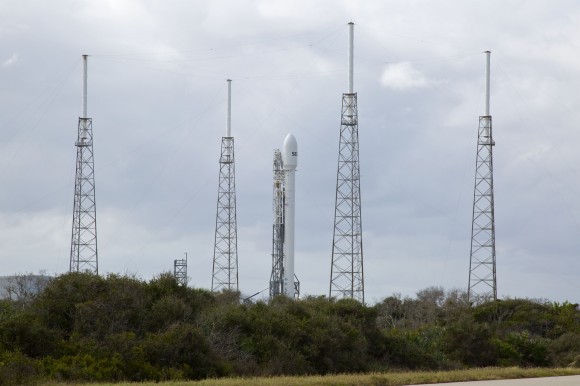 Elon Musk’s SpaceX was ready to test the mettle of its Falcon 9 rocket from Cape Canaveral Air Force Station, on Monday Nov. 25, when a technical glitch forced the private spaceflight company to delay its much-anticipated launch.

SpaceX was attempting to loft a 3-ton commercial television broadcasting satellite, built by Orbital Sciences Corp., into orbit for a Luxembourg-based company, called SES. It is expected that the satellite will help broadcast high-definition television signals to a number of countries, including India, Thailand and Vietnam.

All in all, ground teams made several attempts to try and deploy the Falcon 9 rocket, within the 65-minute, allotted time-frame. Alas, on each successive occasion, controllers were unable to overcome the technical problems that plagued the launch.

ABC News reports that the final hold took place as a consequence of unanticipated readings, associated with the “first-stage liquid oxygen system.” The first two failed attempts were allegedly caused by unrelated technical glitches. According to Spaceflight Now, the first hold resulted from the Falcon 9 rocket switching from external to internal power supplies.

The next launch attempt is slated for Thanksgiving, at 17:38 p.m., local Florida time, the date of which was confirmed by SpaceX during an official statement:

“The launch vehicle and satellite are in great shape and we are looking forward to the next launch opportunity on Thursday at 5:38 p.m. Eastern time.”

The. U.S. Air Force, who provides tracking and communications support, had previously agreed to assist with further launch endeavors, from Cape Canaveral during Thanksgiving, in the event that Monday’s event was unsuccessful.

A Revolution in the Spaceflight Services Industry?

Before the high-profile launch event, Musk, SpaceX’s founder and chief executive officer, described his thoughts on the significance of the launch:

“Whether or not this launch is successful, I’m confident we will certainly make it on some subsequent launch… I don’t want to tempt fate, but I think it’s going to have a pretty significant impact on the world launch market and on the launch industry because our prices are the most competitive of any in the world.”

Indeed, SpaceX looks set to change the future of the commercial launch industry, providing launch services that surpasses its competitors by a significant economic margin; this includes the likes of Ariane 5 and Proton rockets, manufactured by European Arianespace and Khrunichev, respectively.

SES is currently the world’s second most successful commercial satellite operator, in terms of fleet size, agreeing to become the very first company to use SpaceX’s Falcon 9 rocket to send a satellite into geostationary transfer orbit; the company aims to place the satellite into a final, circular orbit of over 23,000 miles above the equator.

Geostationary orbit represents the point at which a satellite, placed in a stable trajectory, orbits the planet in precisely 24 hours. The satellite has an orbital period equal to the Earth’s rotational period and, therefore, it essentially remains in a static position over the Earth; this means that satellite dishes do not need to constantly track its movements.

SES Chief Technical Officer Martin Halliwell was unwilling to disclose the amount of money the company paid SpaceX for the contract, but indicates it fell at the lower end of the company’s price spectrum.

All previous Falcon launches have ventured into low-Earth orbits, principally to fulfill its obligations with NASA. SpaceX has a $1.6 billion contract with the space agency, covering a total of 12 cargo missions to resupply the International Space Station, replacing the operational duties of the retired space shuttle. Thus far, two of these excursions have already successfully taken place, with a third penned for Feb. 22, 2014.

With the Falcon 9 Rocket’s Monday launch scrubbed, due to technical glitches, it is hoped that Thanksgiving will prove a more successful launch date for SpaceX.