By Rebecca Savastio on November 15, 20133 Comments 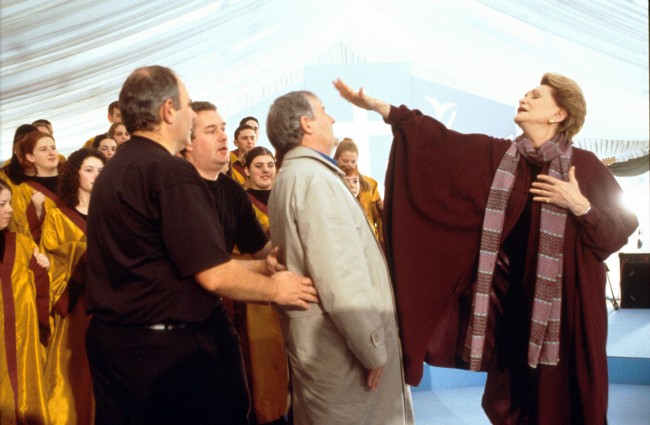 Faith healing has been a long controversial topic in the United States, and now Kenneth Copeland, who makes his living as a television evangelist, and historian David Barton are adding to the mix, telling soldiers returning from active duty that they are acting in the name of the Lord, and therefore, should not suffer from Post-Traumatic Stress Syndrome; but instead, should stand tall.

During the Nov. 11 broadcast of Believer’s Voice of Victory, Copeland read Numbers 30:20-22 to explain why soldiers should not feel guilt or shame after returning from a tour of duty:

“So this is a promise — if you do this thing, if you arm yourselves before the Lord for the war … you shall return, you’re coming back, and be guiltless before the Lord and before the nation,” Copeland told his listeners during his show. Copeland also said that soldiers did not need drugs or psychology to get rid of PTSD; that the promise he had just read would take care of it. Barton listened intently, affirming vigorously as Copeland spoke, before making a few statements of his own.

“You’re on an elevated platform up here. You’re a hero, you’re put in the faith hall of fame,” Barton said before adding that when soldiers did it God’s way, they were not only guiltless of their actions, but esteemed.

Faith healers of all sorts have claimed a sordid past within the nation’s history, often straddling the thin line between religious freedom and the well-being of members of their faith; especially children. Parents of children whose faith eschews traditional medicine in favor of prayer and meditation, as well as natural remedies found within the Bible often find themselves at odds with the United States legal system, especially when a child dies from what could have been a treatable illness or disease.

A recent investigation by Dan Tilkin, a reporter for KATU News in Oregon, once again brought light to not only the deaths of children of faith healing parents, but also Idaho’s Religious Shield Laws, which protect Idaho’s parents from prosecution should their child die due to lack of medical care in the name of faith.

However, while tragic, children who die from faith healing practices tend to be primarily from isolated religious communities (such as the one found in Marsing, Idaho), so it is hard to get an accurate count of exactly how many succumb to the practice, but it does appear to be a smaller number. The issue with Copeland and Barton is that Copeland is a well-known televangelist, and Barton is highly read religious historian, even though some of his historical accounting has been called into question.

This means that their advent against medical treatments for PSTD could have far reaching consequences, especially since PTSD has become a recurrent disorder with those who have served in military operations.

In a report published by the Veteran’s Administration released in 2012, The Report on VA Facility Specific Operation Enduring Freedom (OEF), Operation Iraqi Freedom (OIF), and Operation New Dawn (OND) Veterans Coded with Potential PTSD – Revised, nearly 30% of veterans returning from the wars in Iraq and Afghanistan were suffering from some sort of PTSD. In the report, which culminated medical information from last quarter of fiscal year 2002 through 3rd quarter of fiscal year 2012, 256,820 veterans were seen for potential PSTD. So then Copeland and Barton’s actions become a question of whether advocating that over 250,000 individuals refuse medical treatment in favor or spiritual healing to overcome the traumas of war is not only medically, but theologically sound.

According to an Article in Religion News Today about the broadcast, some experts are, in fact, posing these very questions.

Psychology Professor Warren Throckmorton, from Grove City College stated, “It is obvious that they do not have knowledge of the condition,” he said. “Copeland and Barton err theologically as well by taking specific Scriptures written in relationship to Israel and apply them to American armies.”

His sentiments are supported by another religious authority, Joe Carter. Carter is the communications director and editor at the Southern Baptist Convention’s Ethics and Religious Liberty Commission. He said this isn’t the first time Copeland and Barton have been profoundly ignorant on both the subjects of theology and history, and using the Bible to downplay the pain experienced by veterans returning from war was both “doltish and unconscionable.”

This is not the first time the two men, or members of their “flocks” have been linked to controversy. Copeland and his daughter, Terri Copeland Pearsons, have routinely preached against vaccines; earlier this year, a measles outbreak in September, 2013, was linked to a church led by Copeland Pearsons. Last year, Thomas Nelson, a Christian publisher, said that he had lost confidence in The Jefferson Lies, and ceased publication of the book.

An Editorial By: Heather Pilkinton