By Kimberly Ruble on November 7, 20132 Comments 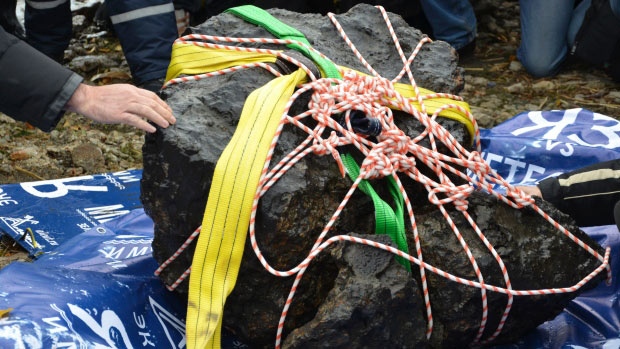 A Chelyabinsk meteorite portion that was pulled out of one of Russia’s lakes on Wednesday might be the largest discovered from the Chelyabinsk meteor crash that happened back in February of this year. It also could be the biggest meteorite piece that has ever been found. It is over 5 foot and is so huge that it broke the scale that was used to weigh it after it topped out at over 1,255 pounds.

Yes it is a big rock but it is not really enormous, stated Caroline Smith, who is the curator for the Natural History Museum’s collection of meteorites in London. Most meteorites have nickel and iron mental in them. That makes them very dense for their size. She said the meteorite that was retrieved in Chelyabinsk was something that happened once in a hundred years.

The meteorite mass was hauled in by divers in Lake Chebarkul which is near Chelyabinsk. The space rock smash into the icy lake back when the meteorite hit, creating a hole that was nearly 20 foot in diameter. 12 more fragments which came from the 56 foot Chelyabinsk meteor have also been discovered in various parts of that same lake.

The meteor came apart about 20 miles above the ground while going at a speed of nearly 41,000 mph. The Chelyabinsk meteorite hit Earth with energy equal to almost 500,000 tons of TNT detonating. The subsequent shock came down and hurt well over a thousand people. That explosion is about the same as a modern day nuclear blast. The Chelyabinsk meteorite is the only one that has ever hurt such a large number of individuals and is also thought to be the biggest space item that has smashed into the Earth since the Tunguska meteor of 1908 which happened in the country of Siberia.

Scientists have hurried to study such an event because they want to know more about such events. The main thing is should people on Earth be worried about many impacts like this in the future.

The information they have gotten have caused researchers to believe the meteor was once a single rock. This was back when it was still an asteroid and was nowhere near Earth. It probably had been hit from other space rocks and had fractures running inside it.

They also state that when it entered the Earth’s atmosphere and smashed down, the huge shock wave that pounded Chelyabinsk was possibly produced when the meteor was about 50 feet above the ground. That was about the time when the giant pieces were quickly breaking apart

Scientists are also now telling the general public that according to statics, Earth’s population should start expecting meteors to impact about every 20 years or so.

There is definitely a need for larger telescopes watching the skies for possible impactors heading Earth’s way. But by the way the Chelyabinsk meteor was facing, in the few weeks before it struck the Earth, it was in a portion of the sky that was near to the sun so that made it impossible to see. This was combined with the problems of it being both faint and very small. Those odds made up for something that had all chance of being missed.

The fact that the Chelyabinsk meteorite smash occurred seems to have really made scientists stop and open their eyes to things like this happening. Meteor impact threats are one of the more grave dangers to the population of planet Earth, and one of the very few dangers that people are able to do something about. Impacts might be almost 100 percent avoidable, if they are worked on by the right individuals.

If that was to be the case, the Chelyabinsk meteorite portion may always be the largest ever discovered because no more might ever strike the Earth and that would be a wonderful thing.