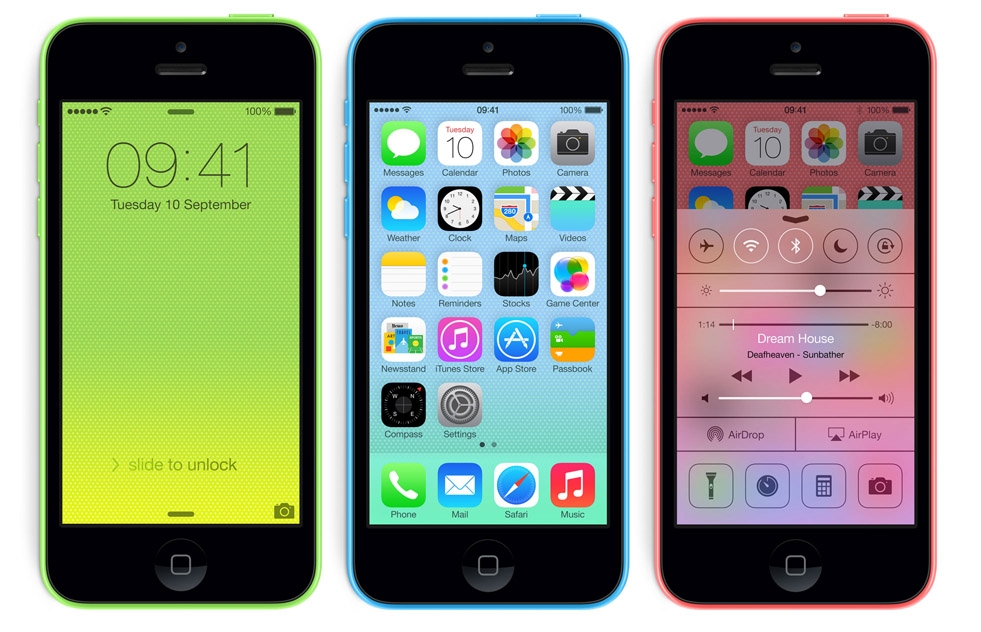 The iPhone 5C and the iPhone 5S are the two successors to the iPhone 5, and this quick guide intends to highlight the similarities and differences between the two.

The iPhone 5C is cheaper.

The iPhone 5S has a faster processor than the iPhone 5C.

The 5S has the new Apple A7 processor. The 5C is its economical counterpart, with a 1Ghz Apple A6, the same as the iPhone 5. The 5S is the first smartphone to have a 64-bit chip; the 5C has a 32-bit chip. They are both fast, but the 5S has a little boost.

The iPhone 5S has a greater storage capacity.

The iPhone 5S has the M7 motion co-processor.

A motion co-processor is a chip that shares data from the iPhone’s physical sensors (the gyroscope, accelerometer, and compass), and can use it to determine body motion. It may have the power to tell whether the user is sitting or standing, for instance.

So far several new apps have employed this new technology, all of them being various pedometers and fitness tools.

The iPhone 5S has a fingerprint scanner.

One major difference between the two iPhones is that the 5S is heralding the Touch ID fingerprint scanner, which means that it needs your unique fingerprint in order to unlock it. The iPhone 5 and 5C do not have this added security measure.

As Edward Snowden has revealed, the NSA can tap into iPhones to surveil your every action. This should make the new fingerprint scanner seem off-putting to anyone who doesn’t want government agencies and private security contractors to have their biometrics on file.

Apple has stressed that your biometric information is encrypted and stored locally on the device, but, according to the New York Times, we’d be naïve to believe this:

“[The NSA] has circumvented or cracked much of the encryption, or digital scrambling, that guards global commerce and banking systems, protects sensitive data like trade secrets and medical records, and automatically secures the e-mails, Web searches, Internet chats and phone calls of Americans and others around the world…”

Both phones can shoot 8 megapixel photos and 1080p HD video, but the 5S has three new features: It has a dual flash which gives “truer-to-life” color, it can has a burst mode that can take up to 10 photos per second, and it has a slo-mo video option that lets you record videos at 120 frames per second at 720p HD.

The iPhone 5C has a wider variety of colors to choose from.

The iPhone 5C comes in green, blue, pink, yellow, and white. The iPhone 5S only comes in gold, silver, and space gray.

6 Responses to "iPhone 5c and 5s: What’s the Difference?"