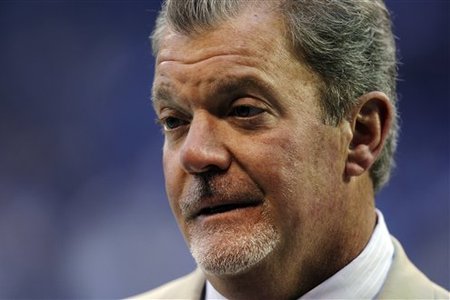 Colts owner Jim Irsay and his wife, Meg, have filed for divorce. They have decided to call it quits after 33 years of marriage. The couple has reportedly undergone irreparable damages to the relationship and have gone on to file for divorce in a Hamilton county courthouse.

The couple was married back in 1980 and have made it more than 30 years together. It is a sad to see another family splitting up in a nation that is riddled with separations and divorces.

Ownership of the Colts team does not appear to be affected by the recent events within the owners personal life. The Indianapolis NFL team was recently estimated by Forbes to be worth $1.6 Billion. It remains to be seen whether or not the events that have transpired in the owners personal life will spill over into the business of owning and operating a football team. As for now the Colts owner Jim Irsay and his wife Meg have filed and will be working through details of the divorce moving forward.

On the cover the Irsay divorce certainly resembles an alarming trend within America. The divorce rate in the nation has skyrocketed over the last century, and the Colts owner and his wife have logged in their contribution to the trend at a time when divorces are all to common. It is also surprising to note that they are in a social demographic that statistically undergoes the least number of divorces per capita. The divorce rate is greatest among the younger age groups, but the Colts owner and his wife have defied the social data with their split after 33 years of marriage.

It is true that the details of the Colts ownership structure will not be changing, legally at least. The issue nobody seems to be focusing on is the kind of message this will send. Even though not everybody is a believer in scriptures, the good book does say, “if the head is sick, the whole body is sick.” The immediate concern when the news of the divorce was released was pointing toward whether or not the Colts owner had put the ownership of the team at  jeopardy as a result of the divorce filing. The tone throughout the reporting of the developments seems to hint at relief that there would be no hiccups in the chain of command, suggesting that once this little storm blows over all will be well.

Everyone can agree however, that when it comes both military war and the game of football, which share many similarities, the morale of the group has a profound effect on the success or failure of the “battles.” In football, as in war, the men in the trenches need to trust one another, they need to know that they can count on the individuals around them for support, they need to be able to draw inspiration from one another, and they need these conditions in order to be motivated enough to personally sacrifice and commit to overcoming all the obstacles they find in their path.

When considering the effects of the Colts owner and his recent divorce filings, the concern should be focused more on the long-term effect of his actions and not on the short sighted worry about the ownership structure. What good will it be to have full control of a team which does not believe in its leaders vision? What good is it to be in control of a powerful army which does not believe in commitment? How much more can be accomplished by men who believe in personal sacrifice, who believe in commitment throughout the good and the bad, who will continue to lay their bodies and physical health on the line for a vision?

Science Daily has released statistics showing that we are in an era which boasts the lowest marriage rates seen in decades, if not centuries. In a time when much of the youth, which make up the NFL are in desperate need of leadership and guidance in their personal lives, this recent news might spell unconscious problems for team, and league morale. In the case of the Colts owner Jim and his wife Meg, and their recent divorce filing, there may be unseen consequences that are not being properly considered. The most important question and worry shouldn’t be focused on the direct ownership structure of the enterprise, but of the moral fallout and message that the recent actions might send rippling through the organization and what ground level effects it might have on the team  as the Colts move forward.