By K. Elsner on November 1, 2013Comments Off on Dell Laptops Smell like Cat Pee, Users Complain 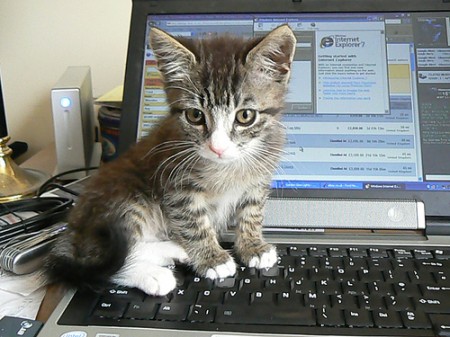 Cats and the internet have a long and ridiculous history together, but Mr. Muffin’s growing incontinence problem is not to blame for your new Dell laptop’s “cat pee smell”. Dell has identified a problem with one of their laptops and has recently altered the manufacturing process of one of its parts to fix the smell.

Many users who purchased the Latitude 6430u Ultrabook have complained that their new laptops smelled bad. One user likens the smell to a tom cat’s litter box and another user says she is too embarrassed to take the laptop near clients for fear that the smell will repulse them. Users have even blamed the smell on their own pets.

Some users have had their foul-smelling laptops replaced, but the replacements smelled just as bad, they said.

When these users began to take their grievances to the Dell web forum en masse about four months ago, it may have seemed at first just another gathering of crazy people on the internet.

Engineers at Dell have known about this smell problem since June and have recently identified the part that is to blame for the smell: the palm rest. Prior to this discovery, engineers advised users to blast the keyboard with compressed air, to no effect. No matter how hard they blasted their laptops with compressed air, the cat urine smell persisted.

Although they have identified the palmrest as the source of the feline odor, Dell has not identified what exactly has caused it to smell that way.

“As for everyone out there with a unit that still exhibits the symptoms,” the statement added, “we haven’t forgotten about you and will make things right.”

According to Autoevolution, nitrogen may be used as a strengthening agent in the manufacture of certain items. In fact, one time the 1983 BMW Formula One team kept cylinder blocks out in the cold and urinated upon them to make their composition stronger. Nitrogen is one of the main components of urine and it allows for nitridization, or the introduction of nitrogen into the surface of a material.

Even with this tidbit of industrial trivia, let’s all be careful not to make wild speculations that Dell manufacturing plants employ cats on their assembly lines or that cats urinate on parts of Latitude 6430u laptops in order to strengthen them. (The Latitude 6430u is billed as “The world’s most durable Ultrabook™)

Perhaps, some other nitrogen-rich substance was applied to the Dell computers in the manufacturing process and that gave them the urine smell.

So for anyone who recently bought one of these Dell laptops that smells of cat pee, the good news is in: you can send your laptops back in to the shop to have the offending parts replaced.