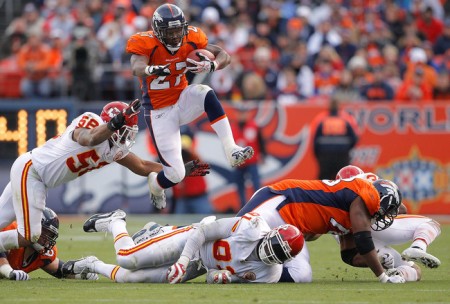 Buckle up and get ready for a wild ride of high octane action when the Denver Broncos face the Kansas City Chief on November 17th. This will be a spirited contest between two highly skilled division opponents. The Denver Broncos are 8-1 on the season, while their division counter-parts are a mind boggling 9-0. Everyone’s going to be tuned in to see if the Chiefs can remain undefeated on the season, or if the Broncos, nearly as spectacular of a team, play will help remove the Chief’s bragging rights as the only undefeated team remaining. Expect high ratings for this game as even those who are not regularly fans of these teams will be tuning in to watch one of the most highly anticipated games of the season so far.

No division rivals have faced each other with fewer than two losses between them this late in an NFL season, ever, so this AFC West matchup is about as good as football games get folks. I envy the fans that are going to get to watch this heated matchup live as the high octane action won’t be quite as adrenaline inducing sitting on the coach watching it. Make no mistake, I’ll be tuned in just like any other NFL fan to watch two of the top teams go head to head.

The Broncos have had success this year by keeping things simple and sticking to their game plan. Will this leave them to predictable though? Teams have caught on that the Broncos are using certain plays early on in the game, to setup the opportunity for other plays later on in the game. Kansas City’s cornerbacks are going to have to focus on getting stops, rather than interceptions. If they start to cheat against Denver’s routes, they’ll get burned as a result, and things won’t end up pretty.

There is the idea floating around the twitter-verse that the Denver Broncos defense is iffy, maybe even below average. Although, I’d say, that’s only because of two bad performances that coincided with the two games that had the most views by fans: Week 5 against Dallas, as well as Week 7 at Indiana. Remove these two instances from the board and this group is allowing a quite respectable 21.6 points per game average. I definitely expect them to give up more than that against the Chiefs, but would be pleasantly surprised to be proven wrong. It quite a statement from this group to play a tight defensive game against a team that has steamrolled 9 opponents in a row and would definitely silence some of their critics. Although, contrary to that idea, I’m hoping for both teams to blow each other’s defense out of the water. I’m going to throw out at guess and say Denver take this game 37-30.

I expect the trend of Denver accumulating more 1st downs than they give up to opponents to continue, since they’ve done a good job at limiting them so far. They have a grand total of 247 1st downs, while only giving up 191. So, expect the defensive line to hold strong on those 3rd downs. I’d say the key to this game for the Chiefs is to exploit that defensive line and continue rushing the ball well as they have done thus far.

Both teams are going to have to stick to their games, all the while throwing in a few unexpected plays here and there to catch the other team off guard. I think the team that waivers from their team game, or is exploited down the middle more often, will be the team to lose this game. As I said above, I see the Denver Broncos to bring some high octane action to this contest and come out on top because of it. Only time will tell, and no matter the outcome, I’m sure everyone will enjoy this mid-season thriller.