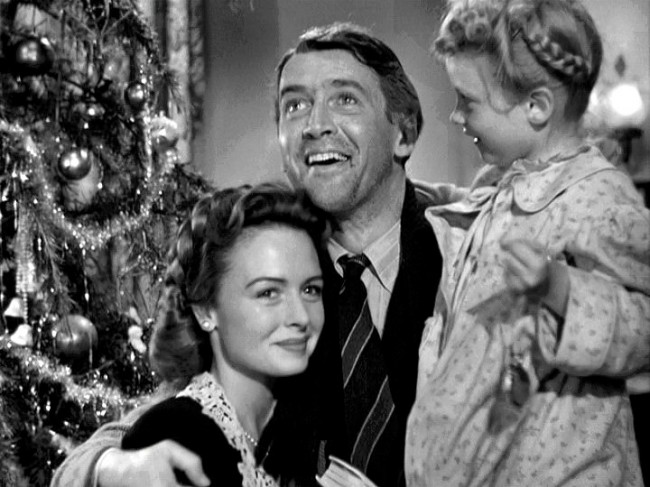 Who can forget the epic Christmas tale, starring James Stewart as George Bailey, who gives up on his dreams to help others, and whose attempted suicide on Christmas Eve causes the intervention of his guardian angel.  The angel shows George the lives that he has touched, and points out how things in his local community of Bedford Falls would have been so different if he had never been born.

Producers of the sequel are hoping to have several of the original cast, who at present have either confirmed, or are still in talks about reprising their roles.

The sequel is slated to have a 2015 holiday release and producers are planning on starting filming early in 2014 in Louisiana.  As yet, no director has been hired.

According to Bob Farnsworth of Hummingbird Productions, the producer and co-writer of the new script, the storyline will retain the spirit of the original film, that every life is important, as long as you have friends.  Martha Bolton is collaborating on the script writing.

“It’s a Wonderful Life is about showing a good guy can win. And with Scrooge, you have a person that is not a good guy but he changes.”

“This story is about the amazing human capacity to forgive when we see someone change for the better.”

Karolyn Grimes, who starred as George Bailey’s daughter Zuzu in the 1946 film, will be playing an angel, showing George’s grandson, who bears the same name, how the world would be if he were not in it.

In the original film, the popular character Zuzu was the little girl who says the movie’s most memorable line,  “Every time a bell rings, an angel gets his wings.”

Grimes, 73, loves the idea of the follow-up, saying that the new film will preserve the feeling of the original.  She says that she has read around 20 possible scripts over the years, each suggesting a potential sequel to the original version of It’s a Wonderful Life, but she said that none were suitable and that they just wouldn’t come close in the entertainment world.

Grimes added she loved the script by Farnsworth and Bolton, and as soon as she read it, she couldn’t wait to participate in his version of the film.

Other original members of the cast, Jimmy Hawkins (the original Tommy Bailey) and Carol Coombs (the original Janie Bailey) are currently discussing the possibility of appearing in the sequel and it is hoped that they will return to Bedford Falls to reprise their characters.  While no one is currently in mind for the lead, producers are hoping to cast the role of George at some stage in February.

The follow-up film will have a budget of around $25 million to $35 million.

The new movie is being put together by Allen J Schwalb of Star Partners, who financed The Color Purple and Rain Man back in the 1980’s.  Schwalb will be working with Farnsworth on the project.

The original movie was based a short story The Greatest Gift, written by Philip van Doren Stern.  While initially the original film performed poorly at the box office, things changed in the entertainment field and the film ended up being one of the most critically acclaimed films ever made.

Released in 1946, the film was nominated for five Oscars and director Frank Capra got the Golden Globe for best director for the film in 1947.

It looks like families and children worldwide will soon have a new standard of annual entertainment with the follow-up of  It’s a Wonderful Life as their new holiday season film.