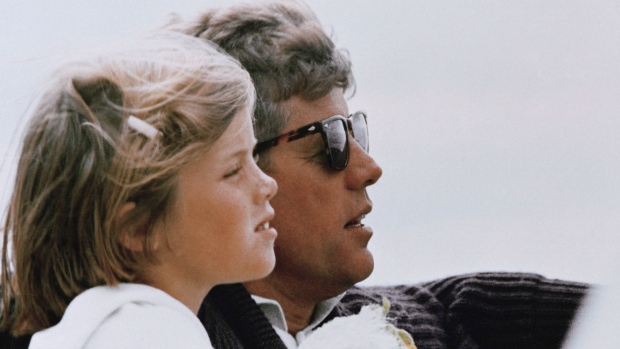 John F. Kennedy, a life of love, loss and legacy is remembered as the eternal flame continues.  Born on May 29, 1917, John was the second child of Joseph and Rose Kennedy.  Growing up in a family of nine, John, fondly known as Jack, had many family obligations and expectations.  The prominent Massachusetts family had dreams and goals for the future as they bonded together within the strict guidelines of family patriarch Joe, Sr.  Rose, was a lovely, soft spoken woman who enforced learning and responsibility.  She instilled values and ambition in her children, and prepared them for life.  The Irish-Catholic family went on to achieve and contribute to society and the nation.

After Joseph, Jr. was killed in World War II, all sights were set on Jack.  He showed his glory early on by graduating from Harvard in 1940 and enlisting in the Navy in 1941.  John F. Kennedy went on to be a leader in congress and the senate before successfully running and being elected as President of the United States in 1960.

Kennedy led a life of trials and tribulations including many close brushes with death.  He had several close calls beginning with scarlet fever at age three.  The boat he was commanding in the Navy in 1943, was sunk by a Japanese destroyer, leaving Kennedy with a lingering back injury.  He later had painful back surgeries and was also diagnosed with Addison’s disease.  His ongoing medical issues were managed with medication, but he kept fit and strong in spirit.  He had work to do in the world, a future to build and dreams to fulfill.  His fortitude did not allow him to give way to ailments or stumbling blocks.  As disciplined as he was, Kennedy also was a bit of a dare devil, living life on the edge at times.  He gave himself permission to take risks, as he was well aware that the days of men are numbered.

Kennedy was a woman’s man, but settled down with his true love Jacqueline Bouvier.  They married in 1953, and Jackie became his loyal supporter.  Despite reports of mistresses, his home and family was always with Jackie and their children.  The dedicated couple went on to have Caroline and John, Jr.  Sadly a stillborn daughter, Arabella, was lost before Caroline.  Patrick, who was born after John, only lived two days.  Kennedy had suffered grief before within his family, but he continued his mission to serve his country.

Kennedy was a dreamer and a doer.  He was an optimist and a champion of civil rights and diversity.  He was a young, vibrant man with family values, patriotism and ideas.  He never gave up as he set forth goals of peace and understanding between nations.  His visions were monumental and his plans were not abandoned.  He played a dominant role in the efforts to control arms and restore peace.  He established the Peace Corps as president and he signed the Limited Nuclear Test Ban Treaty, shortly before his death.  A victory of his vision was accomplished when Apollo 11 landed on the moon on July 20, 1969.  Surely, Kennedy was smiling in the heavens on that historic day.

The world remembers a great man today, 50 years after he was quickly taken from this earth.  President John F. Kennedy was assassinated in Dallas, Texas on November 22, 1963.  The world mourned his passing at the time and continues to recognize his vast contributions today.  He was full of life and love, and his loss carries on through his legacy.  Caroline Kennedy completes the circle of dreams 50 years later as the new ambassador to Japan.  She has persevered after losing her father and in later years, her mother.  Caroline has been diligently following in her father’s footsteps, even after losing her brother John, Jr. tragically in an untimely plane crash.

John F. Kennedy left a legacy of ideals, truths and tenets for America.   He was prepared in youth for great things, which he achieved in a short time.  His realistic view of life prepared him for death in a sense, being a survivor of previous close calls.  It is said that he had a premonition of an early death and oddly his favorite poem was I Have A Rendezvous with Death by Alan Seeger.  The legacy that President John F. Kennedy left is coupled with memories and rekindled hope, as time marches on.