By Cayce Manesiotis on November 17, 20132 Comments 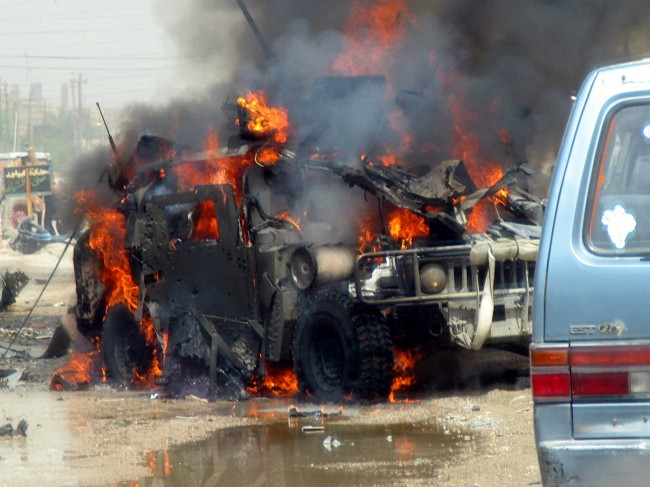 On Saturday, a bomb exploded in a car in front of the Kabul Educational University, just steps away from the location where Afghan elders are scheduled to vote on a security agreement that would grant U.S. troops immunity for crimes they commit in the country as well as permission to stay.

Around 3 p.m. the bomb detonated and killed at least 10 people. Police officials are still clearing the area and reports of more casualties are presumed to follow. The area was filled with students and pedestrians mainly but there was an Afghan army vehicle that was struck. According to the Afghan army spokesperson, one soldier was killed and three others were injured in Kabul on Saturday.

The Taliban is outraged at the security meeting proposal and openly calls anyone who agrees traitors. However, they have not claimed responsibility for the car bomb yet. The group did release a statement a week ago imploring Afghans to reject the Kabul Jirga which will discuss U.S. presence in Afghanistan. The word Jirga is a Pashto term for decision-making assemblies of male elders.

The Taliban statement highlighted how the security council meeting scheduled in Kabul aims to permit American troops  to stay and “implement a treacherous deal which in our history will forever be known as national sedition and a criminal act against our nation. Under this treacherous deal, undertaken between a master and slave, the barbarian American Army will continue its occupation of our beloved homeland.”

The Jirga arranged in Kabul follows the 24-hour meeting last month where U.S. Secretary of State, John Kerry, and the President of Afghanistan, Hamid Karzai negotiated. Prior to the meeting, the Afghan government was at a stand still with American government officials. During the stalemate period, U.S. military training within the country and Afghan military funding paused until negotiations would be reached. The 24-hour meeting was considered a breakthrough.

More than 2,000 Afghans are expected to join the Jirga in Kabul. The Jirga is made up of political figures, lawyers, elders and scholars from the 34 provinces of Afghanistan. The security agreement must be approved at the Jirga and by parliament if it is to go into effect. If approved, up to 10,000 U.S. military will remain in Afghanistan past year end of 2014, the time when Nato forces are due to leave.

The United States is making the immunity ploy a deal breaker to maintain troops in the country. In Iraq, the U.S. withdrew forces when the demand could not be met. Mr. Karzai, has not showed any interest in allowing the request.

The Taliban operates under their own form of Islamic military jurisprudence, which strictly forbids foreigner fighters on Muslim land. Mr. Karzai did extend an invitation to the Taliban for the security meeting in Kabul stating that they are members of the society as well. According to Quran commentators, Muslims are required to always be willing to negotiate peace with another party and do so without hesitation. The Taliban do not view allowing U.S. military forces in the country as a peaceful gesture.

The world was shocked at the pictures and videos of U.S. forces caught on camera and video torturing Afghan civilians and desecrating bodies of insurgents. Many U.S. personnel were charged for their crimes and many were not. However, the images and video footage are forever enshrined on the internet just like the crimes are in the minds of Taliban officials. The Kabul bomb signals outrage about granting U.S. troops immunity and permission to stay. Ahmad Shah Ahmadzai, the former prime minister for Afghanistan, said “we will consider the presence of a single foreign soldier in Afghanistan as an invasion,” and then clarified that “signing this deal will mean an escalation of the fighting and will further destroy Afghanistan.”