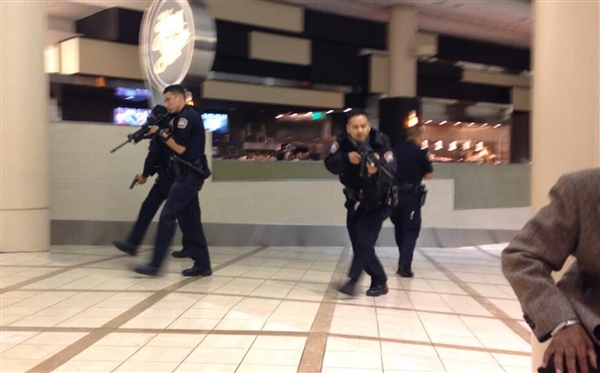 There was a scare at Los Angeles International Airport (LAX) tonight when a metallic grey-colored minivan crashed directly outside Terminal 5 into a stairwell at about 7:30 p.m. PT. Also, officials at LAX received an anonymous phone call from a person who claimed that there was a man armed with a gun at Gate 45 in Terminal 4. These dual incidents caused temporary mayhem and flight delays at the airport.

The minivan crash and the report, which later was confirmed to be erroneous, caused a huge response by the police, who are anxious not to have a repeat of the shooting incident three weeks ago from today. In that incident, TSA officer Gerardo Hernandez, 39, was shot and killed by a gunman inside Terminal 3. Allegedly, the shooter was targeting TSA agents. The man reached into his duffel bag, pulled out a semi-automatic gun, and started shooting.

According to LAX spokesperson Nancy Castles, the sound of the car crash near Terminal 5 is what led at least one person to erroneously report that he’d heard gunfire inside of Terminal 3. The caller also said that he’d seen a gunman at a gate of Terminal 4.

When people heard what they thought was gunfire, the evacuated the terminal on their own, in case there was a gunman on a suspected shooting spree similar to the situation three weeks ago.

After police arrived, they searched both Terminals 4 and 5 to make sure that they were secure and that there were no gunmen in the area.

In the November 1 attack at LAX, the TSA officer who was a victim of an alleged gunman was shot 12 times.

However, in the incident on Friday night, according to LAX Police Sergeant Ortiz, no shots had actually been fired. As a precaution, Terminal 4 was evacuated, but now that Terminal 4 has been declared to be safe, travelers must go through security as usual, according to Castles. She added that the dual incidents were responsible for causing some delays in flights.

Due to the large number of police cars and emergency vehicles which responded to the two incidents, there was a traffic gridlock in the area of LAX. Until further notice, traffic was directed away from the airport’s upper level to the lower level roadway.

An unidentified woman was assisted out of the crashed minivan, or possibly SUV. Previous to her being put into the ambulance, according to reports from people at the scene, she was conscious and was able to stand.

These two incidents coincide with the beginning on Friday of the popular 11-day Thanksgiving travel period. Friday is one of the airport’s busiest days of the entire year.

Fortunately, the two incidents of the crash of the grey minivan outside of Terminal 5 and the subsequent report of there being an armed gunman in Terminal 4 did not prove to be serious ones, resulting in the loss of life, like when the alleged gunman, Paul Anthony Ciancia, 23, opened fire.

The TSA officer he was reportedly targeting was shot and killed three weeks ago and six other people were hurtat LAX. Since then, Ciancia has been arrested and charged with murdering the TSA officer.The dual incidents did cause there to be a temporary mayhem at LAX, though, until police managed to assess that there were no gunmen in the area.