Miley Cyrus Most Weird, Embarrassing and Shocking Moments in 2013 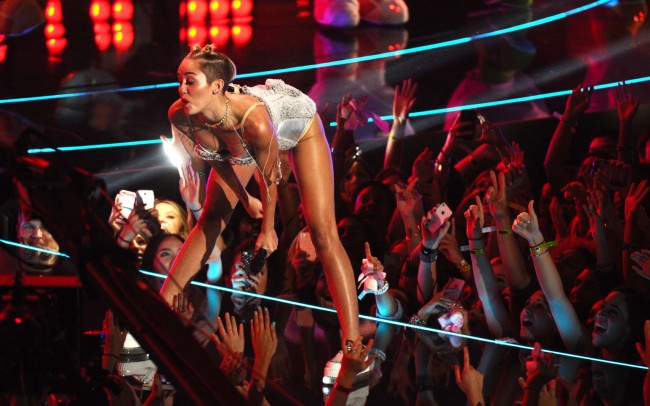 Since the release of Can’t be Tamed in 2010, Miley Cyrus has been nothing but controversial. She has hit headlines for many of the wrong reasons but she has gained more in her first 21 years than many do in their lifetimes. Of all her moments in 2013, it’s time to look at the top five most weird, embarrassing and downright shocking Cyrus moments.

There are too many embarrassing and shocking moments to mention from this performance. From straddling a large bear, twerking Robin Thicke and doing that horrible thing with the foam finger, this really tops the list of the 2013 moments. Cut to the expressions of the audience and they were less than impressed. The only expressions worth mentioning are the shocked and disgusted looks from Will Smith and his children.

The Moment She Became a Hypocrite

‘A star is someone who doesn’t have to take her clothes off to be sexy because you naturally have star power.’ Those were the words right out of Cyrus’ mouth during an interview with ELLE earlier this year. Since then, she has been seen half-naked, grinding and twerking on the stage. Did she forget the words she said or has she decided that she’s not a star after all?

When She Chopped Off Her Locks

For Cyrus fans around the world, this was one of her most shocking—although not quite embarrassing or weird—moments in 2013. During her summer in Philadelphia, she decided that it was time to get rid of the long brown locks. She opted for a pixie cut and dyed it blonde and has now decided that she can be herself. Can one hair cut really make her attitude change that much?

As part of the weird collection, the photoshoot with Richardson has to be on the list. She definitely let her personality come through and showed off her wild and fun side but some of the shots were just strange and shocking to say the least. Some of the more out-there shots include giving the camera the finger and smoking to show that she’s an adult now.

The Drama With Liam Hemsworth

It finally seems to be over with Hemsworth but it took a long time to come to that conclusion this year. They were on and off for what seemed like an eternity. Between a lot of apologizing and making up, Hemsworth could not deal with Cyrus’ wild and ever changing attitude. She is nothing like the girl that he met on the set of The Last Song and is reportedly embarrassed by her antics, like much of the world and the audience of the MTV Video Music Awards.

Cyrus is definitely not one to care how others see her or think of her. She has her own style and maybe should be applauded for having the guts and confidence to show that style off. However, it has led to some shocking, embarrassing and downright weird moments for Cyrus in 2013 alone. There are still a few weeks left to the year and it will be interesting to see what she does next.

One Response to "Miley Cyrus Most Weird, Embarrassing and Shocking Moments in 2013"