Monty Python: Nobody Expects the Spanish Inquisition or a Reunion 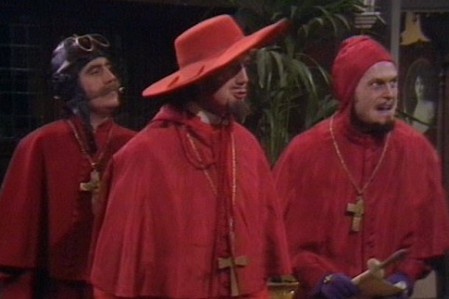 Monty Python, in particular the Flying Circus that captivated an entire generation of teenage boys who discovered, by word of mouth, these hysterically funny Englishmen are to make comedy history and, finally, have a reunion, which, like the Spanish inquisition nobody expected. Members of the 30 year old comedy troupe often joked that they would never reunite unless the late Graham Chapman could be resurrected.

Anyone who grew up in America in the late 60’s and early 70’s will remember the riches of English comedy that could be found on the Public Broadcasting Services (PBS) channel. One of the most popular shows that was broadcast from across the big pond was Monty Python’s Flying Circus. A hodgepodge of comedy that featured sketches featuring dead parrots; the ministry of funny walks and John Cleese sitting behind a desk being swamped with waves while saying “now for something completely different.”

Of all the members of this, then, revolutionary group of comics, Cleese had the most television experience with his earlier appearances on English television as a regular of That Was the Week that Was and, later, The Frost Report; where he was joined by the other Python regulars, Chapman, Gilliam, Palin, Idle and Jones in the latter comedy show which ran just before Flying Circus was broadcast.

The skits that the Monty Python crew produced were almost all incredibly memorable. Very few were instantly forgettable and all could reduce the audience into helpless quivering bundles of laughter. One such routine was the Spanish Inquisition skit. I can remember this long running gag as vividly as when I first watched it on PBS as a teenager. I even remember the best episode of the lot; Court Charades.

In Court Charades, the trio are apparently miles away when their cue is called. Once the judge says his lien, the entire courtroom stands up and look at the courtroom doors. This skit, to the best of my memory, started at the beginning of that weeks program and lasted throughout the entire show. At the end of the show, while the credits rolled, the trio burst into the courtroom and struggling for breath say, “NO-body expects the Spa… oh, bugger,” just before the episode ended.

Just like the skit implied, nobody expected the Spanish Inquisition and nobody expected a Monty Python reunion, not after all these years. But the remaining members are finally getting back together, at least that is the rumor on Twitter and from the British press.

John Cleese, Terry Gilliam, Michael Palin, Eric Idle, Graham Chapman and Terry Jones all went down in comedy history as a result of first their Monty Python’s Flying Circus television show and then their feature length films which included And Now For Something Completely Different; The Holy Grail, The Life of Brian and The Meaning of Life. The shows and the films contributed to the groups fame and status as icons in comedy.

The death of Graham Chapman in 1989 of cancer seemed to mark the end of an “era” and thus began the rumors of a reunion that could never, at least according to the surviving members, happen. Now all of the remaining troupe are in their 70’s, at least, and this could well be the last time they ever recreate some of their most famous routines.

Apparently some of their “lost” material will also be performed in their upcoming stage show which will be formally announced on Thursday. Eric Idle has been teasingly tweeting short updates on the upcoming press conference as well as Michael Palin. Palin has been a world traveller and his documentaries have made him quite a different sort of comedian. Palin has also devoted some of his time to speak to young offenders in juvenile prisons in England.

The excitement building up to the Thursday announcement of the reunion is incredible. Fans are on the edge of their seats waiting eagerly for confirmation of this momentous event. Nobody ever expected the Monty Python reunion, just like nobody expects the Spanish Inquisition and this time, no one will have to wait until the end credits to see them.

One Response to "Monty Python: Nobody Expects the Spanish Inquisition or a Reunion"