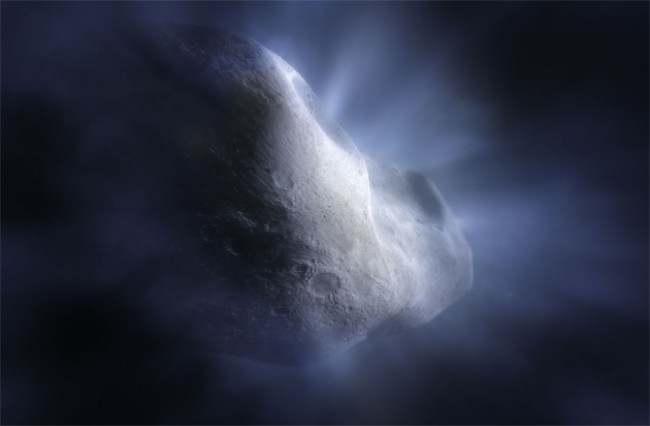 This year for Thanksgiving, NASA is thankful for comet tracking technology with the rare opportunity to capture comet ISON’s impact with the sun. This ancient comet has an icy past, back dating over 4.5 billion years to an area filled with what NASA scientists believe to be in the original ingredients making up the Earth’s solar system.

Scientists have been hot with speculation regarding what the aftermath of this cosmic drive-by will look like but three main out come theories have risen from the debates. ISON itself is under a mile wide, and consists of approximately 2 billion tons of ice and dust and will be just grazing the surface of the sun at about a one million mile distance. One million miles may seem like a rather large amount of room for a comet to escape without much damage, but when factoring in gravitational pull and the intense solar radiation of the sun, this is most certainly not the case.

Since its discovery by two Russian astronomers, NASA has kept quite a close tab on the comet. Up until a few weeks ago, ISON had not been displaying the anticipated flairs that were projected to have been observable at this point in time. The comet has offered quite a roller-coaster of surprises for many people tracking its life, exhibiting indications of death, revival, more death and as has been exhibited recently a rather intense revival once again. All of this leads up to what could be ISON’s grand finale Thursday, while scientists spend their Thanksgiving in the NASA Solar Dynamic Observatory finding out once and for all if the comet gets roasted.

The increase in ISON’s flairs and glow mean great things for comet-watchers. The gas being emitted and ignited as the comet travels not only illuminates it, but also is what will provide the most impressive display if it’s able to hold itself together for the duration of it’s collision with the sun.

NASA scientists suspect that as ISON passes through the sun, one of three situations will occur. The first and most ideal option is that the comet will be able to endure the forces that sun throws at it, and what will results will be a bright emergence past the sun, potentially visible by naked eye afterwords.

The second option, which could still prove interesting for those looking for a show, would be that the gravity of the sun and solar radiation break up ISON into large enough fragments that some sort of a display is still visible.

Of course most disappointing of all, if ISON is not able to withstand the pressure, the third option is that it disintegrates completely into a cloud of dust.

Unfortunately, the actual collision itself will not be visible by naked-eye as the proximity to the sun renders it far too bright for the human eye to be able to withstand. However, as solar events of this magnitude are apt to do, observatories all over the world will be providing footage and photography of this spectacle. NASA anticipates being able to capture the entire display this Thanksgiving and hopefully for the scientists, even if they can’t have Turkey, they can enjoy ISON’s roast instead.