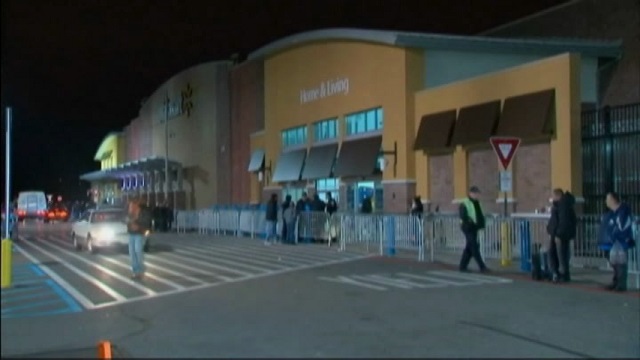 Richard Ramos, age 29, a shopper from Newark, New Jersey, was drenched with pepper spray and then arrested after he got in an argument with one of the managers at a Garfield, New Jersey Wal-Mart store in a Thanksgiving dispute. It started when shoppers began to rush into store areas where sales were going on Thanksgiving night, stated local police.

Ramos allegedly became aggressive as he was talking with another shopper about a television set around 6:35 p.m. He then attempted to attack one of the Garfield town police after the manager requested aid, explained police lieutenant Martin Gray.

Police who were working on the scene during the busy shopping time were already trying to deal with another altercation. A woman who was in the infant’s section of the store had allegedly spit on someone else’s child. As they were giving out a summons to that particular suspect, they happened to hear a man who was close by inside the store and was yelling vulgarities.

When they found the individual, Wal-Mart security asked the police officers to make the man leave the store grounds, explained police. They tried to guide Ramos out but the man turned around and suddenly grabbed hold of one of the officer’s shirts. He continued to scuffle with them as the police attempted to put handcuffs on him. According to a witness, the authorities ultimately had to pull out a can of pepper spray and use on Ramos in order to get the man to calm down.

The arresting authorities were indeed forced to use the spray on Ramos in order to pacify him before they could arrest the man, agreed Gray.  The alleged attacker was accused of aggravated assault on a police officer, resisting arrest and also disorderly conduct. Ramos is being held at the Bergen Correctional Facility, which is located in Hackensack, New Jersey in lieu of a $20,000 bond.

Garfield, New Jersey firefighters along with the police were already located around the business district for security for stores such as Wal-Mart and other places of business that are located in the area. There were expected to be over thousands of customers that showed up to the area stores for all the various store deals that were to go on all through the entire Thanksgiving weekend.

Police stated it was not immediately known just exactly what Ramos and the Wal-Mart supervisor were quarreling about. Lt. Gray also refused to give any speculation. He added that none of the other customers in the store or any of the employees were involved in the occurrence, and that not anyone else was hurt in the ordeal.

Kayla Whaling, who is a spokesperson for numerous stores in the Wal-Mart chain, stated that the group of stores has an order of plans in place which are known as crowd management plans for all of their 4,000 plus nationwide stores but refused to comment over what happened at the Garfield store, which is located in the northern part of the state.

The New Jersey shopper that was pepper sprayed and arrested on Thanksgiving night was due in court on “Black Friday”, a day in which he was unable to be out with even more shoppers.