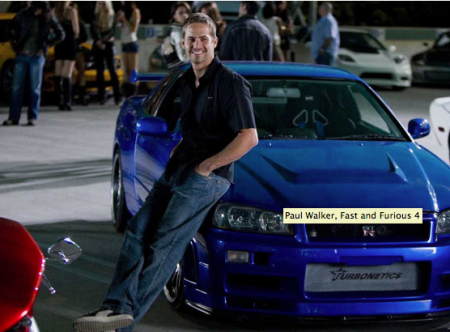 Paul Walker, the American actor who started working on television commercials and later catapulted to fame after starring in the Fast & Furious franchise has died as a passenger in a flaming car crash the day after his death had been falsely reported on the internet. Just one day after he was declared dead as part of a death hoax the actor died in a fiery car crash.

Paul William Walker IV was born on September 12, 1973. He was a native Californian having been born in Glendale, Ca. Walker and another person were in a red Porsche in Valencia, Santa Clarita, California when the vehicle suddenly left the road and crashed into a light pole and a tree. The car exploded and burst into flames and the local police declared both occupants of the car dead at the scene.

Paul was an avid surfer and he had an immense interest in marine biology. Paul first got work in the industry as child when he worked on a Pampers commercial. Walker then became a child model at the age of two and he started working regularly on television shows starting in 1985. He worked on Who’s the Boss, and the daytime soap The Young and the Restless, to name but two.

In 1986 Walker started working in films with his debut feature being the comedy/horror film Monster in the Closet. It was not until 1998 that Paul made enough of an impression, in what was his biggest role to date, in the film Meet the Deedles which garnered his first real taste of fame. He worked in other films afterward that included Pleasantville and The Skulls, among others.

Paul’s casting in the 2001, film The Fast and the Furious opposite Vin Diesel made him a household name. His work in the film made him a star and it guaranteed his return to the sequel in 2003. After working on several other films, such as The Lazarus Project and Running Scared , over a period of years he returned to the franchise that made his name.

Just one day after Paul Walker’s death had been announced on the internet as part of a death hoax he died in the fiery car crash. The initial story was declared to be a hoax and his fans breathed a sigh of relief. Today, at 7:15 p.m. Pacific Time, Paul’s rep announced that the star was dead after a single car crash in Valencia, California. The avid car enthusiast was not driving the Porsche when it crashed.

Since Walker’s death was reported Twitter has been filled with tributes and fan’s disbelief. The hashtag #RIPPaulWalker and #Varsity Blues, another film that Paul starred in, as well as Fast & Furious sans hashtag are trending topics on the micro blogging site. Many of the comments deal with the idea that he will no longer be in the Fast & Furious franchise.

Paul’s rep included information that the star was in that part of California to attend a charity function that was raising money for the Philippines. The car that he died in was not his and he was not driving. A spokesperson from Universal Studios released a statement saying how shocked and sad they were at the news and they offered their condolences to his friends and family.

Sadly, it was only just announced that Walker would be starring as Agent 47 in the 2014 reboot of the film Hitman. The death of the 40 year-old star has stunned the world and Twitter continues to fill with tweets from friends, colleagues, family and fans.

It is very ironic that Paul Walker was the victim of a cruel death hoax that claimed the actor had died the day before; only to perish later in a fiery car crash. On Saturday morning, Walker’s rep released a statement that said Paul was alive and well, only to later have the horrible duty of reporting his death. Our prayers go out to his family and friends. RIP Paul Walker.