By Michele Wessel on November 30, 2013Comments Off on Philippines’ Recovery Efforts Continue to Reveal Horrors 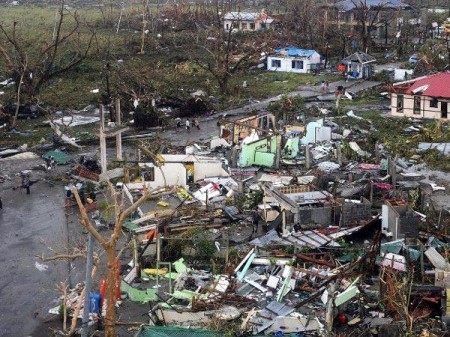 Recovery efforts following the devastating typhoon in the Philippines continue to reveal horrors.  More than two weeks after Typhoon Haiyan initially hit the nation of islands, the death toll is closing in on 6,000, with many more still missing.  An additional 3.8 million people have been displaced in the aftermath of the typhoon. In many places bodies of the deceased have yet to be cleared and searchers aided by cadaver dogs report finding an average of about 45 additional dead each day.  Progress in the Philippines’ recovery has been inhibited by the need to first make roads passable for access and by the danger of searching in areas with many collapsed businesses and homes.

As victims begin speaking out and telling their survival stories, the nightmare of what they have witnessed quickly becomes apparent. A young girl reported seeing her mother there one moment, and gone the next. She also watched as one of her brothers disappeared into the water and as her home ripped in two. Her grandfather shed tears as he explained that the bodies of his family were likely placed in mass graves and were unlikely to be recovered.  Her younger brother recalled seeing his deceased brother’s face. Stories of similar horrors will undoubtedly continue to be revealed as Philippines’ recovery efforts continue.

As aid efforts in the Philippines continue, focus is shifting from searching to providing for basic needs such as clean water, medication, electricity and hygiene items.  As aid continues to reach farther out into rural areas the need for this basic type of assistance becomes more clear. The risk of the spread of disease in the Philippines created by overcrowded living conditions, unsafe food and especially contaminated drinking water becomes more real as time passes and typically peaks between one week and one month after this type of tragedy. Diseases such as dengue and cholera could spread extremely quickly in the overcrowded shelters erected to temporarily house the displaced.   Should disease break out, young children are generally the most vulnerable to the risk of death.  Diarrheal diseases, common in situations like this, can result in severe dehydration quickly in children. The availability of water purification tablets and water filtering systems will be key to preventing the outbreak of disease as the Philippines continues to recover after this horrific tragedy.

An additional danger exists following Typhoon Haiyan for those devastated in the Philippines.  The Phillipines is already widely known as a source country for human trafficking and this tragedy may make potential victims more vulnerable.  Unaccompanied children in the Philippines could be the victims of adults posing as friends or relatives attempting to claim them for human trafficking purposes.  Adults are also at risk, particularly in very rural areas where the livelihood of many depends on fishing and farming just to stay alive.  The false promises of jobs and money may be quite appealing at a time like this. Some groups, such as the National Inter-Agency Task Force Against Trafficking are trying to get the word out about this potential danger and how it may look to citizens in regions of the Philippines hit the hardest by Typhoon Haiyan.

Recovery efforts continue in earnest with many countries offering aid, but full recovery from the continued threats and horrors of Typhoon Haiyan will be years in coming.