Police are failing to tackle racial abuse, which has led to the Muslim minority struggling to conquer ongoing attacks. Tell Mama, an anti-Muslim prejudice organization, has recorded 1,432 cases of abuse in just 22 months.

The cases that are sent through to the police by Tell Mama are not all being dealt with. Fiyaz Mughal, founder of the Faith Matters organization, stated that “the number of investigations that have moved forward have been extremely small in comparison to the volume of hate crimes we have sent in to police forces.”

Just this year a young girl was attacked by three teens after leaving Al-Noor mosque. They had been complete strangers and left her with a bump on the head, and minor injuries to her hands and nose. Before the physical attack, the three girls had shouted racial abuse at her, and as she tried to flee the scene they had cornered her against a brick wall.

Tell Mama deal with a scale of abuse like this, from harassment and name-calling, to death threats and threats towards a mosque, such as burning it down. When people come forward with allegations of such crimes, Tell Mama records the details, and reports directly to the Association of Chief Police Officer’s hate crime reporting system. However, they have voiced concerns that the police are failing to tackle the problems of racial abuse.

In London this year, the Al-Rahma Islamic Centre was burnt down in a suspected arson attack. The building had the letters “EDL” drawn onto it, which stands for the English Defence League, a far-right group that has held several protests around the city. A week prior to this in the city of Grimsby, a mosque had been pelted with petrol bombs. The Muslim community are tired of such treatment and have complained that not enough is being done in order to stop such attacks from happening again. 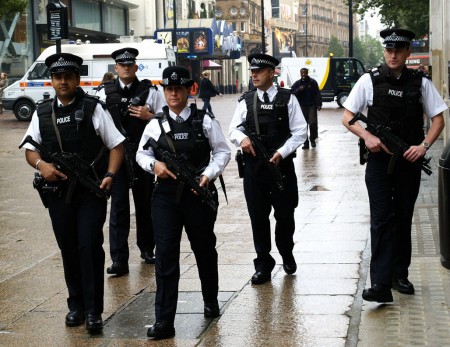 Scotland Yard Police Department was taken to court for allegations of their own prejudice towards Muslims. The Independent Police Complaints Commission ordered investigations, after numerous Muslims made complaints with allegations of discrimination, and being stopped or detained without just reason because of their religion. However, after the police did not file these complaints within the seven days they had been given, the IPCC made a legal claim, stating that if the police had nothing to hide they would have provided the evidence. Asif Bhayat from CagePrisoners, which is a human rights organisation, stated that there has been “arrogance and high-handedness” displayed by the police.

Shockingly, out of the 1,432 reports filed by Tell Mama to the police, only 70 had got a response. One woman reported a hate crime, because a photo of her was posted on twitter and had been surrounded by racist comments. She has chosen to keep her identity concealed, but has come forward to speak about her experience because when she informed the police, they told her there was nothing they could do. They told her that it was extremely difficult to prosecute someone for online abuse, but that they would be in touch. However, they have still not been in contact.

Police are failing to tackle racial abuse and anti-Islamic attacks are on the rise. Tell Mama continue to provide as much help as possible, but insist they need the police to follow up on more cases.