By Rebecca Savastio on November 6, 20132 Comments 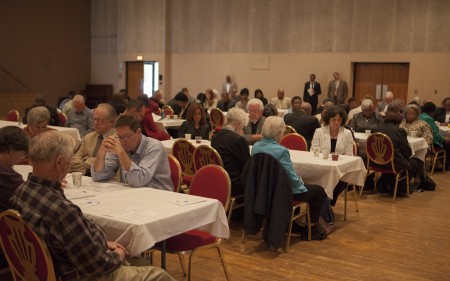 During a Supreme Court hearing over prayer at public meetings, Justice Scalia asked the rather ridiculous question “what about devil worshippers?” He asked this as the discussion turned to the possibility of coming up with a prayer that would suit “everyone.” Apparently, Scalia has those who love the Dark Prince on his mind a lot lately. His question has been answered, unbelievably, by the “Communications Director of the Satanic Temple.” (Huh! Who knew the Satanic Temple had a communications director? Or even that there exists a Satanic Temple at all?) As it turns out, says Lucien Greaves in an email to National Journal writer Brian Resnick, the answer is no, there is no one prayer that can suit everyone.

Scalia’s question drew laughter from the crowd, but it brings up a much more serious question, and that is when will our society discard ancient superstitions altogether in favor of rational thinking? To discuss prayer at public meetings;  a prayer that would “suit everyone,” and examine its usefulness at a town event,  first, let’s look at what prayer can and cannot do.

Individual prayer has been proven to promote feel-good brain chemicals, lower blood pressure, and provide a sense of well-being to the person praying. Similar results have been found for meditation in general. Many studies have been done through the years that measure brain activity during deep prayer and subsequent relaxation, and the results are concrete: Prayer creates positive neurological activity, makes a person feel better, and even gives them a very real sense that they are having a spiritual experience. However, these results are for individual, private prayer, not the kind of quick, public prayer that would be performed at a town meeting. So far, no direct benefit from brief public prayer has been proven.

Now let’s take a look at what prayer can’t do. Intercessory prayer, that is, prayer which asks God to intercede in a situation on behalf of someone else, has been proven to be of no benefit. So, for example, prayer circles for someone who is ill: they do nothing. If the person recovers, it’s because of medical intervention and the person’s own physical makeup. A peer-reviewed, controlled and published study has proven that no benefit is received from intercessory prayer. The study, entitled Study of the Therapeutic Effects of Intercessory Prayer (STEP) in cardiac bypass patients: a multicenter randomized trial of uncertainty and certainty of receiving intercessory prayer showed no benefit to the patients receiving prayer. Actually, the patients who knew they were being prayer for actually fared worse than those who did not receive any prayer.

Taking science out of the picture for one moment and just relying on anecdote: why would God help someone find their car keys after a prayer, but not help all of the children who are starving and dying all around the world despite thousands or millions of prayer for them daily? It’s simply illogical. If someone finds their car keys after a prayer, it’s due to chance. They simply attribute the prayer to solving the problem, but God didn’t solve the problem; their own brain did. That example, of course, is not scientific, but we can look to science to answer the question of whether intercessory prayer helps the sick, and the answer is a very clear “no.”

Prayer also cannot and should not inform our government. Our nation is a melting pot of faiths, beliefs, opinions, outlooks and perspectives; and we are supposed to have a separation of church and state. We should no more run the government based on Christian beliefs than on Muslim traditions, Hasidic Jewish regulations, or Scientology practices. The government should not be formulated, sustained or changed by any of these superstitions.

Prayer can’t help to solve a budget crisis, put up a new stop sign, allocate funding to schools or fix a traffic light. Prayer can’t do any of the things required at a town hall or any other civic meeting. Therefore, prayer does not belong in the town hall purely on the basis of its tremendous inefficacy alone.

What about devil worshippers in this discussion of prayer at public meetings? Their time would be better served by doing good works in the community rather than wasting energy on an entity that has never, does not now, and will never, exist. It’s time we put these childish things behind us and move on to issues of actual importance rather than drag out a conversation in which the primary topic is so very useless in a public forum.

2 Responses to "Prayer at Public Meetings-What About Devil Worshippers?"