Raheel Sharif Is the New Chief of Pakistan Army

Our politicians learn nothing from history 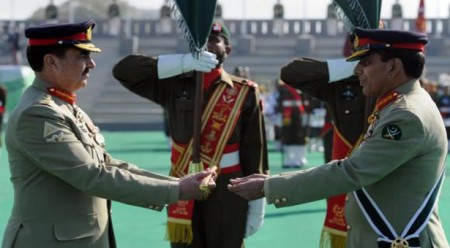 Lt. General Raheel Sharif  is the new Chief of Army Staff in Pakistan. He was allevated to the most powerful position in Pakistan by Prime Minister Nawaz Sharif, the Commander-in-Chief of Pakistan. The new chief though shares the same name with the prime minister, he is not related to him.

Our politicians have made a habit of not learning any lessons from history. PM Sharif assured the nation on countless occasions in public and private that the principle of seniority would be followed while making any important appointments, but when the moment arrived the criteria was completely disregarded.

Zulfiqar Bhutto, the father of Benazir Bhutto made Zia-ul-Haq, the chief of Pakistan army by superseding senior officers and had to pay the ultimate price for his decision, as Zia-ul-Haq was the main character in implicating him in a case in which he was hanged. This black chapter in Pakistan’s troubled history is remembered as the judicial murder of an elected prime minister.

Nawaz Sharif also made the same mistake in his previous term as he made Musharraf the chief instead of officers senior to him. He paid for his bad decision when Musharraf toppled him in a bloodless coup in 1999. He would have been tried in the courts for sedition had not Saudi Arabia intervened and saved his life. He spent many years in exile in Saudi Arabia, Dubai and England. At present tables are turned and Musharraf is now facing the music as now he is charged for high treason under article six of the constitution of Pakistan.

COAS Sharif is a highly decorated and respected soldier. He is known in the army ranks as a thorough professional. This is one of the reasons he stayed away from meddling in politics during Musharraf’s era. His staying away from the political affairs helped him reach this high pedestal.

Pakistan army is one of the most respected force in the world because of it high standards and to be the chief of Pakistan army is a singular honor. Sharif, belongs to a family of soldiers. There are two recipients of Nishan-e-Haider: the highest military award in Pakistan awarded to a select few martyrs of Pakistan army, in Sharif’s immediate family.

Pakistan is America’s front line ally in the war against terror, therefore, it is necessary that Pakistan army is headed by a thorough and able professional so that the peace of the region is ensured. In addition, Pakistan’s valuable nuclear assets are also in the hands of the army and it is the responsibility of the chief to ensure that anti-state actor such as the Taliban stay away from these nuclear facilities.

It is hoped that Sharif like his predecessor General Kayani will not meddle in the political affairs of the country but instead will concentrate his energies for improving Pakistan army. This is of utmost importance because Pakistan lies in a very strategic and volatile region of the world. As a last word, we hope the very best for Pakistan and Sharif, the new chief of Pakistan Army.

The Times of India