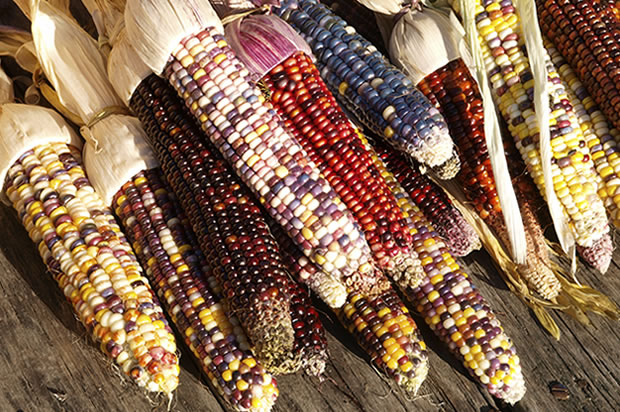 Corn has long been associated with Thanksgiving and the Native Americans. It lends itself to easy storage, preservation and was consumed in many different forms at nearly every meal. The Native Americans utilized the leftover husks and cobs to make mats, baskets and even fuel darts that were burned. Its usefulness as a crop was shared with early European settlers. Today its influence is obvious since the United States uses more farm land to grow corn than any other crop. The Native Americans had a lot to credit to corn, but today perhaps Thanksgiving meals should omit corn.

We have learned to use corn in even more diverse ways than those who originally taught us. Corn in some form is nearly inescapable. It is not only the origin of corn meal, corn syrup and corn starch; but maltodextrin, magnesium citrate, potassium citrate, caramel color, ascorbic acid, cellulose, ethanol, modified food starch, citric acid and hydrolyzed vegetable protein, to name a few. It has been added it to fuels, cosmetics, medications, vitamins, plastics, diapers, even matches and batteries. While many would admit that it is a cheaply bought and useful crop others may argue that it has far too costly effects on the economy and more importantly on the health of individuals.

Corn growth receives the largest amount of farm subsidies in the United States, just below $85 billion dollars in less than 20 years, according to the Environmental Working Group. Taken with the fact that 60 percent of crop insurance premiums come straight out of taxpayers’ pockets it starts to look as though corn may not be a very economically productive crop. Groups such as Taxpayers for Common Sense critique government subsidies, “When some of the worst conditions in the field produce one of the best years for the bottom line [of farmers], it should teach us a simple lesson — that agriculture safety net is too generous,” says a Weekly Wastebasket newsletter from the group. Even when government subsidies are removed from the discussion, corn has many other costly effects.

Ethanol, derived from corn, is now present in over 50 percent of our fuel supply and fuel additives said to counteract the damaging effects are being developed by companies like Briggs and Stratton. Not only can ethanol decrease fuel efficiency by up to 30 percent it damages small engines to the degree that it can nullify your warranty. Yes, the cost per gallon of gasoline with ethanol is lower, but the gasoline is essentially watered down. More gas ends up being used in the end. With all of the fuel being burned to produce and transport fertilizers and pesticides, to irrigate the fields, and transport the end product; how environmentally friendly can ethanol really be?

The New England Complex Systems Institute did an analysis of ethanol production versus the value of corn as food. They reported that the amount of ethanol used to produce one gallon of gas is more than it would require to feed one person for a day. Even when corn is not used to directly feed people it feeds the poultry, pork, and beef that they later eat. Some people are concerned about the effect that all that corn has on our health, and rightly so.

In the past corn was a healthy food as it provided essential amino acids, though it was not genetically modified, but corn has run amok in the United States. People are putting unhealthy choices into their bodies, devoting too much farmland to it, making animals sick with it and later eating them and the list goes on.

Most people are not enticed by the idea of eating sick animals but many are unaware of just how sick their corn fed cattle may be. Michael Pollan discussed this issue in an interview with Frontline. He stated that corn, given enough time will actually kill the cows that are unable to properly digest it. It also makes cows more susceptible to seemingly unrelated illnesses prior to slaughter and increases the need to administer antibiotics. It is common knowledge that the use of antibiotics in farm animals increases the resistance of pathogens, creating a dangerous scenario for modern society. The draw for feeding cows corn comes from how cheaply they can be fed and that they grow much more rapidly. In the past, a cow took about 4 years to reach slaughter size, but with corn it can be done in only 14 months. According to Scientific American cows that are raised on corn, rather than grass, make meat that is higher in calories and contains more omega-6 fatty acids and less omega-3 fatty acids—“a dangerous ratio that has been linked to heart disease.” Corn is also fed to poultry and our plump Thanksgiving turkeys are on that list.

If a person does not want to eat corn whether in the form of corn bread stuffing, sweet corn, tamales or corn casseroles they might be stuck eating it anyway because it is hidden in so many other foods. Perhaps,Thanksgiving meals should omit corn to start an official boycott on corn.

The Huffington Post reports that 88 percent of corn grown in the United States is genetically modified. There is a lot of debate over whether or not GMO foods are bad for the bodies but plenty of research suggests it is. The International Journal of Biological Sciences published a study which found that genetically modified corn causes liver and kidney failure. Moms Across America published a report on their blog which caused a heated debate about GMO products. A nutritional analysis of corn was done by an independent, outsourced, major food company.  According to the analysis, the GMO corn contains a similar amount of nutrients as non-GMO corn, but has elements absent from traditional corn, including chlorides, formaldehyde and glyphosate and in harmful quantities. There is more than enough evidence that exists which warrants skepticism on the part of consumers. Fortunately, for people who prefer to keep their diets natural and healthy, labeling is allowing them to make a choice to avoid GM foods.

When most people think of “commodity” they think of items that can be effectively sold but also things that are highly valued. The latter may be less true of corn. Given the amount of taxpayer money that goes into it, the burning of fuel to grow and transport it, the wasted resources that could be used to feed people (who have no better option) and the damage it does to the engines of bodies; what is actually “value” has become questionable. So, when sitting down this Thanksgiving, perhaps with a cornucopia centerpiece, be thankful for the company, all the food to eat but also of the research and the free speech right to say “I will pass on the corn.” Just be aware that the gravy, cranberry sauce and turkey eaten may all be “corn-fed.”