Yale University on Lockdown as Police Look for Potential Gunman 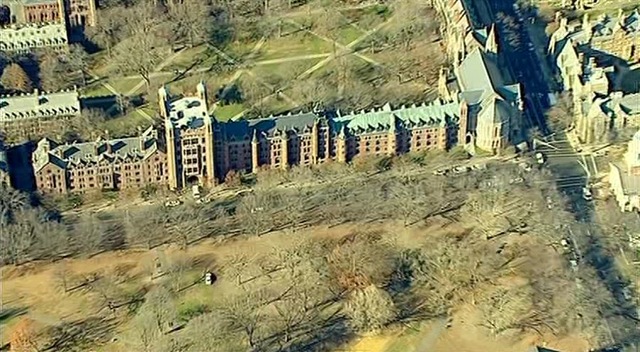 Yale University continues to be on lockdown as Connecticut police continue to look for a potential gunman after an anonymous person called 911. He stated that his roommate was going to the college campus in order to “shoot people,” authorities said on Monday. He made the call from a pay phone that was located approximately a mile from the school. The anonymous phone call that lasts several seconds was received from a telephone booth in the 300 block of the Columbus Avenue area.

The male caller called the police at around 9:45 a.m. There were several witnesses who described seeing a person carrying a gun, but authorities have gotten contradictory information about what the individual looked like. Police believe it could have been possible that the witnesses were happening to see responding officers arriving on scene answering the initial call.

The hunt for the possible gunman comes just as the school had begun a November class break. It has been obstructed by students who were still on campus and were scared to open doors, explained Connecticut police officer David Hartman. With so many still left in the dorm rooms, investigators were having trouble gaining access to some of the rooms because the students who were locked inside had to be convinced they were in deed dealing with law enforcement. The majority of room doors do not have any peepholes.

Classes are scheduled to start again on Dec.2. Many students and staff had already left campus because of the upcoming Thanksgiving holiday.

So far, there has been no sniper located on the Ivy League campus, nor have there been any reports of shots fired. However, SWAT teams search the streets all around the college looking for the possible suspect. It is being reported they are also heavily stationed on Elm Street.

Police have also blocked off numerous streets that are located around what is considered Yale University’s Old Campus. It is located in the middle of New Haven, and is where they seem to also be searching for the gunman more intensely. The area has also put numerous local schools in lockdown mode.  There was a helicopter flying around the entire region while ordinary pedestrian traffic was extremely light. The weather is very cold and windy, and that is believed to be helping keep individuals away from the area as well as fear about the possible gunman being on the loose.

The authorities were going to start room-by-room search, which was to begin with the housing college areas, Yale stated in an alert they released at 1:45 p.m.

This is not the first time Yale University has been the target of violence. In May of 2003, a bomb exploded in an empty classroom and adjoining reading room.

David J. Gelernter, who was a professor at Yale, was seriously injured back in 1993, when he received a mail bomb from the Unabomber, Theodore Kaczynski, and it burst in his campus office.

The Yale University campus will remain on lockdown until police find the potential gunman or they give the all clear, whichever happens to come first.