Incoming! This could be the cry within a few years if Amazon’s CEO Jeffery P. Bezos has his way. Bezos told CBS’s 60 Minutes last night he plans to use drones, or rather Quadcopters a type of drone, for same day deliveries. According to Bezos they will be used on a limited basis on deliveries within a ten mile radius of Amazon fulfillment centers, and it should take 30 minutes to receive the package.

Amazon currently has 89 distribution centers and is planning seven more. Bezos doesn’t say how many drones would be assigned to each of the centers, but we can assume it would be more than one. Add this to the estimated  30,000 drones which will be flying around in 20 years and the skies will be crowded. According to GizMag, the average size of a drone 3D Robotics is currently working is 21.7 inches long and 3.9 inches high, weighing about 45 ounces.  This drone would be able to fly for about 15 – 18 minutes, which is less than what Amazon is looking for. This would be a fairly cheap drone to use which can carry a payload but we can assume something a little beefier would be used. Some of the possible benefits of such a system would be the elimination of fossil fueled vehicles from the roads around the distribution centers and there would potentially be cost savings if the system was efficient enough to replace others shippers such as UPS and FedEx.

What could possibly go wrong with Amazon using drones?

As with any technological wonder, there would certainly be a certain amount of risk having these unmanned drones flying through the air. The old adage of what goes up must come down certainly applies here. If a drone carrying a five pound object were to malfunction and suddenly drop from the sky, there is a risk of it causing some harm either to property or humans. What if the drone malfunctioned and crashed into an automobile on the expressway causing a major pile-up? For those not well versed in physics,  forces travelling in opposite directions colliding with each other at high rates of speed isn’t good. There is also the possibility the package could be released while the quadcopter was still in the air leading to the call of “Incoming!” and then the package hitting something it should not. 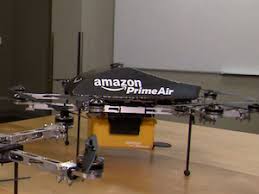 Bezos told CBS he is awaiting Federal Aviation Administration (FAA) approval and the FAA is currently developing regulations regarding the use of unmanned aircraft although most of it seems to be directed at privacy concerns when drones are outfitted with surveillance cameras and other equipment.  So far, the preliminary guidelines from the FAA appear to deal with larger drones than would be used by Amazon, however they do include the smaller ones. Could these drones somehow interfere with other commercial aircraft? Probably not, but if one bird can potentially bring down a jetliner, a rogue drone certainly could as well. The roadmap which has been released by the FAA addresses things such as licensing of operators, how high they can fly and n what airspace, drone inspection and even communication issues.

A more or less serious side of the issue is how this could affect various jobs, especially at companies like UPS, FedEX and the United States Postal Service. While getting the drone program off the ground will take some time, there is the real possibility this could replace some delivery jobs at these companies. Even though Bezos has said the program will only be within ten miles of the fulfillment centers, it would probably expand as technology improves. Some of these workers, most notably US Postal workers are sure to be upset and we have seen in the past they don’t take extra stress well. Could this lead to some disgruntled employee “going postal” and shooting down these drones?

What will happen with these Amazon drones is hard to say. Will there be serious problems? Will there be accidents and other incidents? Yes, as with any new technology and innovation there will be bugs to work out. As Jeff Lowe from the Asian Sky Group says, it will have to be made “idiot-proof” or the FAA will certainly shut the program down after any accidents. We’ll be waiting for Jeffrey Bezos calls of “Amazon Incoming” soon.

2024 Candidates Will Not Be an Old Man and an Even Older Man: I Hope

The US Justice System Has Flaws

The Pledge of Allegiance, John Wayne Movies, and America Is Always the ‘Good Guy’

Supreme Court Reform Is a Fantasy