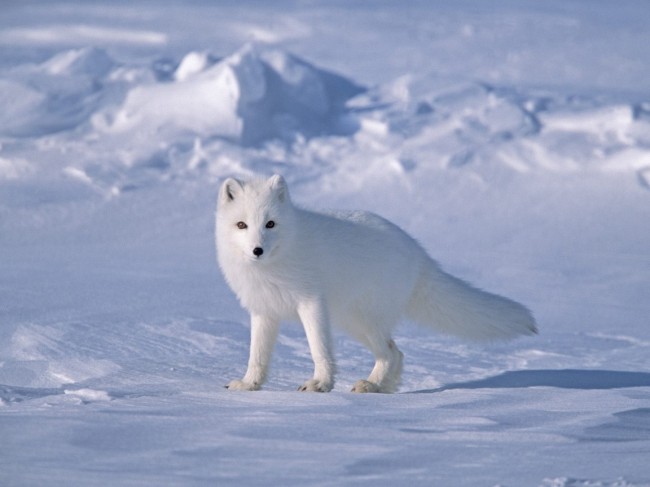 Arctic Foxes are no longer threatened directly by humans. Their extreme habitat challenges them; but they continue to do well, other than in the Scandinavian mainland. They are an interesting species because they typically mate for life, but also use the help of an extra female to tend to their young. They live in the tundra and have a fur coat which provides camouflage and changes with the season.

Arctic fox numbers in the wild have rebounded due to the decline in the fur trade; but they remain endangered in the Scandinavian mainland, where their numbers are estimated to be as few as 120.

One threat they face in their environment is the movement of the red fox further to the North. This is believed to have occurred due to climate change. It causes the Arctic fox to now compete with the much larger, and typically more aggressive, red fox. The red fox is the largest of the foxes.

Arctic fox locations are also tied to the movement of lemming populations, a primary food source. Arctic foxes remain opportunistic due to the scarcity of food in the harsh tundra habitat.

Arctic foxes are white in winter, having a thick coat to protect them from the elements. They also have a thick tail which they use to curl around themselves as protection from the harsh wind and cold tundra winters. Their tails also help them to balance.

In warm summer temperatures, the fox’s coat changes from white to gray, brown, or yellow, helping it to remain camouflaged in its surroundings. There is also a blue phase fox which has a long gray coat in winter and a darker gray coat with a sometimes brownish tinge in the summer. The summer coats of the arctic fox are shorter and thinner.

Their beautiful warm coats caused them to be threatened, due largely to hunting by humans. Now that the fur trade has decreased, efforts to help the fox have successfully restored their numbers. They are still hunted, but typically in more remote areas.

Arctic foxes build dens, sometimes in the snow, but also in rocks or low mounds. They are extremely resourceful and well adapted to their surroundings, as they use the snow to help keep stored food from going bad.

The main predator of the fox is the polar bear, yet they closely and bravely follow bears to scavenge on the leftovers from kills. The arctic fox is an omnivore that will hunt creatively for small mammals and eat berries or vegetation other times. They even eat insects, birds, bird eggs, fish and stool, depending upon what is available.

When hunting, males and females will jump off of the ice or snow and pounce back down to break through air pockets and get prey located beneath. Their exquisite hearing and forward facing ears help them to detect small prey below the snow with amazing accuracy.

Arctic foxes are monogamous, they typically live in a family group with one male and two females that tend to the young. The younger female often remains from the prior year’s litter and assists with caring for pups. However, the male fox also helps in rearing the young.

Litters usually consist of five to nine pups, though as many as 25 young have been documented. They are born in two litters a year, one sometime near April and the other in July. Their gestation period only lasts about eight weeks.

The arctic fox is an animal that is remarkably well adapted to a barren habitat. Their small groups and litters twice a year, along with the aid of man who has come to protect it, has helped their numbers rebound. This magnificent arctic animal is no longer threatened by humans in most locations. Efforts have been made to protect them from hunters, who sought them in order to also utilize their warm and beautiful coats.

4 Responses to "Arctic Fox No Longer Threatened by Humans"