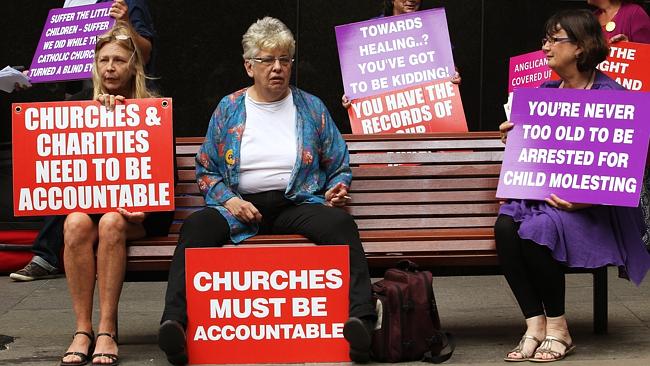 The Australian Newspaper The Daily Telegraph is reporting that a new scandal has come to light in the Catholic Church as the organization has finally admitted to paying out $43 million in hush money to victims of sex abuse at the hands of pedophile priests. The admission came at a commission meeting in Australia yesterday, as victims flooded the meeting room with protest signs that stated “Churches must be accountable;” “You’re never too old to be arrested for child molesting” and “Suffer the little children-suffer we did while the Catholic Church turned a blind eye.”

This admission by the church marks the very first time the organization has ever publicly admitted to paying out hush money to sex abuse victims, stunning the crowd and leaving some victims crying. About a dozen people stormed out of the meeting room, reports the Telegraph, when a church council member stood up and read a quote from the bible, saying “Let the little children come to me; do not stop them; for it is to such of these that the kingdom of God belongs.” The quote was deemed highly inappropriate by the victims at the meeting, who questioned the judgment of someone who would use such a quote at an event pertaining to molesting children. Survivors at the meeting called the quote “a joke” and “an insult” as well as said it was “insensitive.”

Victims at the meeting said they were part of a program run by the church called “Towards Healing.” That program, they say, paid them hush money in exchange for keeping quiet about the sex abuse they had suffered.

During the meeting, a church spokesman admitted that the church had “betrayed the trust” of the victims and their families. He also said that some members of the church placed more importance on the church’s reputation than on the victims’ wellbeing. Towards Healing had been created and maintained specifically for handling child sex abuse cases. Victims were forced to sign statements of secrecy which prohibited them from discussing their cases with anyone. The so-called “confidentiality” agreements secured the Catholic Church’s reputation from further damage, say the victims, while largely ignoring the plight of those affected by the crimes.

The Towards Healing program is still up and running; and it still provides compensation to the victims. It is called a “living document” which is open to being revised. In a document published on the parliament.vic.gov website in Australia, a review of the original 1996 document states that victims classified the treatment they received from the church as being approached with “an obsession with secrecy and confidentiality” and that the proceedings were purposely “drawn out to wear down the complainants.” Victims also said they experienced “a lack of compassion.”

One victim told an independent reporter ‘It’s not Towards Healing, it actually takes you towards madness,” citing the fact that there were forced confidentiality agreements and a lack of understanding and care given to the victim.

One victim at the committee meeting in Australia said “Just as abusers control and silence their victims, the church had to silence and control people like me.” She said that the releases she signed forbade her from discussing the abuse she suffered with anyone, including her immediate family. Not only were victims forbidden to discuss the events they had suffered, they were also forbidden to say anything “disparaging” about the Catholic Church.

Allegations and reports of hush money being paid out to victims and even to priests have been around for years, but this is the first time the Catholic Church has openly admitted sex abuse hush money was paid to victims. Now, as this new scandal comes to light, it could be just the beginning of many more revelations to come.