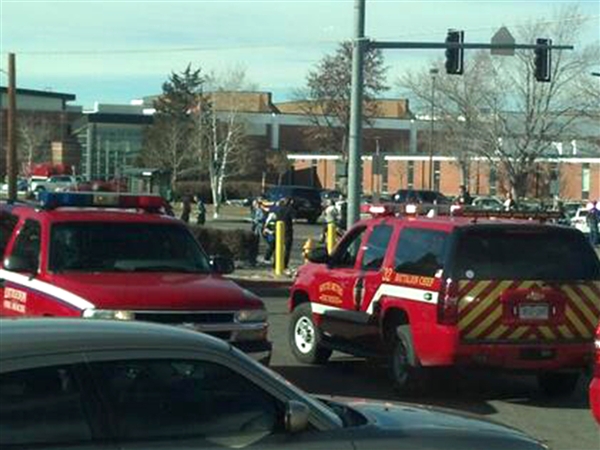 Eighteen-year-old Karl Halverson Pierson, a student, has been identified as the shooter who walked into a high school in Colorado on Friday and began firing. It is believed by some that he may have been seeking to get revenge on a teacher; but, instead, critically wounded a classmate before committing suicide.

The student who was injured was a fifteen-year-old girl who was said to be in a local hospital and in critical condition.  Grayson Robinson, sheriff of Arapahoe County, told reporters that another student was thought to have suffered a gunshot wound as well; but, in reality, was covered in blood from the actual victim.

The sheriff also said that two explosives were found at the scene. One of those was ignited immediately before or during the actual firing of gunshots. The second explosive was never actually deployed.

As of Friday night, the body of Pierson had not been removed from the school since law enforcement authorities were still treating the area as a crime scene and an investigation was still active.

Initial investigations pointed to some disagreements between Pierson and a teacher.  Sheriff Robinson said that he believed the motive may have actually been in reaction to those disagreements.

Pierson entered the Colorado high school a little after 12:30 p.m. at an entrance near the student parking area. Upon entering the building, he asked to see a specific teacher. Robinson said the teacher then made a very smart move by leaving the building with the idea that it would draw the armed Pierson outside.

It is not believed by law enforcement officials that the student who received critical wounds was an intended target. Rather they believed that she had the misfortune of being in the area while the shooting was taking place.

Later, the body of Pierson was found in a classroom inside the main building. Authorities have determined that it was more than likely a suicide.

Besides the school, authorities were investigating other areas as well. These included the shooter’s vehicle, the home in Highlands Ranch, Colorado, where Pierson resided, and another home to which it was believed that Pierson had some kind of access.

Jade Stanton, a sophomore at Arapahoe High School, began text messaging her mother, Tracy Monroe, when the shooting started.  Monroe had step siblings who had been students at Columbine and began to watch her phone closely as the drama unfolded.

Monroe immediately went to the school and was comforted to receive a text from Jade that a law enforcement officer had just informed the students that they were safe.

Ironically, the shooting came one day before the one-year anniversary of the violent tragedy at Sandy Hook Elementary School in Newtown, Connecticut. In that incident, a gunman killed twenty children and six adults.

The school is actually located just a few miles from the Columbine High School in Littleton, Colorado. In 1999, two teenage gunmen killed twelve fellow students and a teacher before committing suicide.

Pierson was described to law enforcement officers by his fellow classmates as being a amiable, intelligent young man who loved to discuss the political climate of the nation. He was also said to be for gun rights. However, students were quick to say that they had never seen Pierson with a gun.