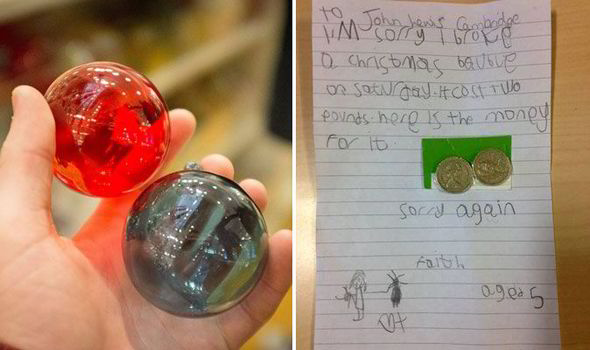 A little girl who broke a Christmas bauble in a department store on Saturday, was so upset she wrote a letter of apology, the store were so touched they set up a twitter campaign to trace her.

Faith, aged 5, had sellotaped two-pound coins to her note to cover the damage. Her note read, “ To John Lewis Cambridge, I’m sorry I broke a Christmas bauble on Saturday. It cost two pounds. Here is the money for it.”

Store Manager Dominic Joyce said they received lots of nice letters but this one was particularly special. “It melted everyone’s hearts. We just thought it was so sweet.” He went onto twitter to try to find the girl. His tweet read, “The cutest letter sent to JL Cambridge. There is no address so we wanted to thank Faith on Twitter.”  He used the hashtag #findfaith.  They wanted to reward her with a treat for her honesty.

After a flood of comments and retweets, all agreeing how much this showed the true spirit of Christmas, he confirmed that Faith’s parents had since seen the tweet and been in touch. They said no further thanks were needed. He remains impressed by how well brought-up she is.

Last year, Lily Robinson, aged 3 ½, went viral with her sweet letter to a local grocery chain. Proving the old maxim that the “customer is always right” Lily wrote to point out that a popular bread loaf, named “Tiger Bread” actually looked a lot more like a giraffe, than a tiger. “Why is tiger bread called tiger bread?” she asked “It should be called giraffe bread.”

Two weeks later she got a reply from the customer services manager. “I think renaming tiger bread giraffe bread is a brilliant idea” said Chris King of Sainsburys. He agreed with Lily that  the blotches on the crust looked much more giraffe-like than tiger-like. He went on to say “The first baker who made it thought it looked stripey like a tiger. Maybe they were a bit silly?” 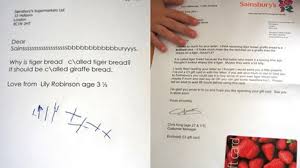 Mr King sent Lily a £3 gift card to spend in the store and signed himself off (age 27 & 1/3). The correspondence was widely shared on Facebook and twitter with much praise for the sensitive and friendly style.

The company then issued a statement, “In response to overwhelming customer feedback that our tiger bread has more resemblance to a giraffe, from today we will be changing our tiger bread to giraffe bread and seeing how that goes.”

Chris King went on to train as a primary schoolteacher.

These cute kids letters just go to show that the art of letter-writing is not dead, even in this internet era.  In fact, it may even be experiencing something of a comeback.  Letters of Note, the website started by Shaun Usher, has millions of followers for his collection of “correspondence deserving of a wider audience.” Supported by crowdfunder site Unbound, it is now set to be a best-selling book.

Letters of Note has 1.5m visitors every week and a six figure Twitter following with famous fans including Stephen Fry and author Nick Hornby. As Usher says, there is something so special about an actual letter, it can be a “rare and soaring delight” to receive one. “There’s just so much more to enjoy.”

In 125 wonderful examples, the book opens with a note from Queen Elizabeth to Dwight Eisenhower, the then US President. Dated 1960, she pens, “Seeing a picture of you today in today’s newspaper standing in front of a barbecue grilling quail reminded me….” It is not any affairs of state to which she refers. She goes on to say, “that I never sent you the recipe of the drop scones which I promised you at Balmoral.” The queen of England then proceeds to give the president of the United States the ingredients and the recipe for 16 people.

In conjunction, publishers have also released To the letter by Simon Garfield, which is a history of the epistolary arts.  The two books are both garnering a lot of attention, and although they are with different publishers, Usher and Garfield have sensibly combined forces to promote them.

“I really wish it would cause a huge resurgence,” Usher has said, but he admits his own three-year old son is already addicted to his iPad. Whilst there is no turning back technology, there is no doubt that a hand-written or personal letter is still a source of great pleasure and has an appeal that an email never can.

Kids who are sitting down to write their letters to Santa Claus still have to rely on good old-fashioned stationery and pen after all.

Perhaps, as the cute cases of Faith and Lily so well demonstrate, the future will still hold a place for letters, supported and dispersed further afield by twitter and other social media.