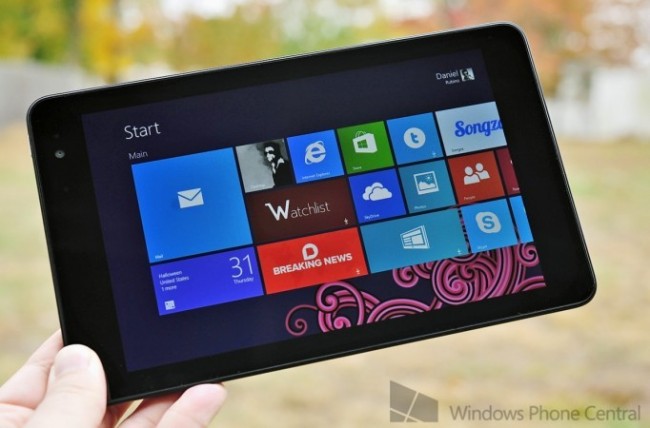 Black Friday and Cyber Monday are over, but there are still good bargains to be had, as the Microsoft Store will prove this Monday by offering the Dell Venue 8 Pro tablet for just $99, when it usually sells for $299. All 77 of the Microsoft Stores around the USA will sell the Dell Venue 8 Pro for this promotional price, but the catch is it’s only for the first 20 people in line at 10:00 a.m. to buy it (and only 1 per customer).

The rest of the day, the price of the tablet will increase to $199 and will remain at that price while supplies last. This promotional deal is the first one the Microsoft Store will off in its “12 Days of Deals” sale.

What if you don’t have a Microsoft Store in your town?

Don’t fear if you happen to live in a city which doesn’t have a Microsoft Store nearby, but you still want to get in on this deal. You can still get in on the price of buying a Dell Venue 8 Pro for just $99 if you are fast enough and lucky enough to be one of the first 100 consumers online to buy it this Monday at 10:00 a.m. ET.

Then, after the first 100 tablets are sold, the price will be increased to $199, just like in the Microsoft Stores. At least one online source (MorningLedger.com, below) indicates that this $199 price will be good for just the next 100 units sold; then, the price would go back up to $299.

That’s just 100 of the  Dell Venue 8 Pro tablets for the entire rest of the country, though, so if you do happen to live in a city which has a Microsoft Store in it, you might have better luck trying to be one of the first 20 people in line to buy one on Monday morning.

What are some features of the  Dell Venue 8 Pro tablet?

The  Dell Venue 8 Pro tablet features an 8″ touchcreen with pretty decent resolution of 1,260×800 pixels. The tablet has few bells & whistles, but it also offers 32 GB of storage, the full 8.1 Windows system, card-reader support, Microsoft Office Home & Student 2013 and much, much more. As the 8.1 Windows operating system uses up so much memory, though, you will really only have access to about 11 GB of the 32 GBs.

There are cheap options available to increase the amount of memory you’ll have available, and the Dell Venue 8 Pro Tablet also has 2GB of RAM. The tablet is one of the thinnest being sold on the market, and weighs in at under a pound — only 13.4 ounces. It also has a 4830 mAh battery that will last you from eight to nine hours of use.

One drawback is that it doesn’t come with a keyboard dock. One is included, though, in the ASUS T100, which is being sold at around the same price. Also the Dell Venue 8 Pro Tablet it doesn’t have a HDMI port, a full-sized USB port, or display connector. Getting a stylus and a physical keyboard costs a bit more money.

As to the other sales that Microsoft will be offering during the rest of its “12 Days of Deals,” they are not yet mentioning specific prices, but some of the product categories they will offer special deals in include smartphones, computers, and various accessories like ones for PCs, Windows, Xbox, fitness, and music. Updates will be posted online.

The Dell Venue 8 Pro was just added to Microsoft’s lineup in October. It’s a great tablet, especially at the $99 price, if you are one of the lucky few to get it at that price this Monday. Even at the $199 price, it’s still a pretty decent deal. It will definitely be interesting to see what other special deals Microsoft will be offering on the other 11 days.