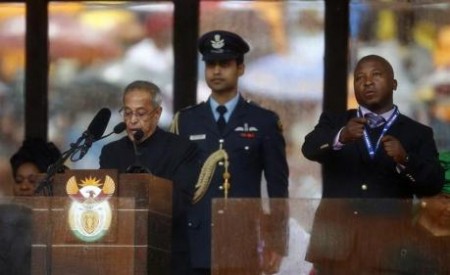 A man flailing his arms around with “childish hand gestures” behind President Obama and President Jacob Zuma at Mandela’s memorial is a “fraud” interpreter with still no explanation for why he was allowed at the service, say concerned deaf citizens.

The latest controversy in the Mandela memorial service involves an unidentified man, who stood on stage for hours making “no sense in any language”.

Tweets and angry blog posts flooded the blogosphere during the event, with an enraged deaf community blaming the South African government for not hiring a proper sign language interpreter.

“Please get RID of this CLOWN interpreter, please!” tweeted Bruno Peter Druchen, head of the Deaf Federation of South Africa.

Even after the influx of angry responses from concerned citizens, the man was brought back on stage Wednesday, ushering in a cascade of complaints.

Standing only feet away from world leaders, the man’s inexperience and apparent lack of professionalism was broadcast to millions of viewers around the globe, something that the deaf community says is unacceptable and an embarrassment. The resulting effect deaf groups say is that the man inadvertently marginalized the deaf community, which was “contrary to everything Mandela fought for”.

Officials have not been clear on how, or why, this man was let on stage as a deaf language interpreter. One of South Africa’s Presidency ministers Collins Chabane said that the government is launching an investigation into the incident, and will publicly report any information they can conclude.

Other controversies surrounding the Mandela Memorial, like the now infamous Obama selfie picture, along with Archbishop Emeritus Desmond Tutu’s house being burglarized while he was attending the service, severely undermines the legacy of Nelson Mandela, say observers.

CEO of the British Deaf Association David Buxton had harsh words for the ‘fraud’ interpreter, saying that South African authorities should “name and shame” the man. Buxton continued by saying that the man’s lack of sensitivity and clear disregard for the needs to communicate effectively with the deaf was “disrespectful and hurtful” to deaf people everywhere.

Mr. Buxton went on to say that it was “hours of complete nonsense,”.

Explanations on Twitter say that the man may have been signing in a South African language like Xhosa or Zulu, but critics and deaf groups say that that was not the case, and the man clearly “never learn(ed) a word of sign language in his life”.

Sign language experts in South Africa asserted that none of the country’s 11 languages were represented in the man’s feeble attempt.

This isn’t the unidentified man’s first round at the rodeo though- he had been hired by the South African government on previous occasions to provide deaf language interpretation. At President Zuma’s military event last year, the unidentified man was videotaped signing President Zuma’s speech by an audience member, which was formally submitted to the Federation for the Deaf. The group submitted a complaint to the African National Congress over the man’s inability to sign appropriately.

So was this man really a ‘fraud’ interpreter, or merely incompetent in his profession? Either or, why was he allowed on stage?