By James Fenner on December 19, 2013Comments Off on Gaia Space Observatory Launched to Survey 1 Billion Stars 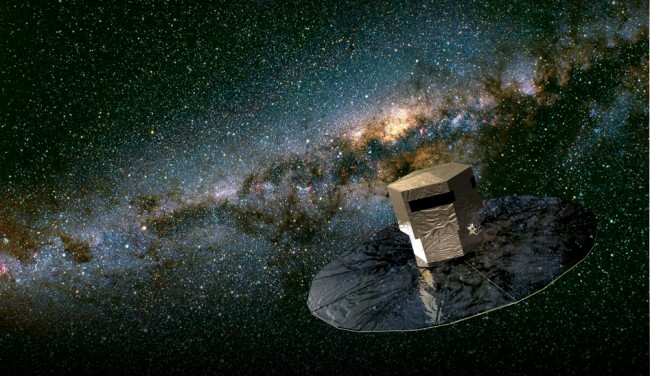 The European Space Agency’s (ESA’s) Gaia mission launched on the morning of Dec. 19, aboard a Soyuz rocket. Blastoff took place from a spaceport in Kourou – a commune in French Guiana, situated on the northern coast of South America.

Gaia is a space observatory that was launched by the ESA. Costing $1.2 billion to manufacture, Gaia was designed to create a 3-dimensional “space catalogue” of around one billion astronomical objects, representing one percent of the population of the Milky Way.

The Soyuz launcher is operated by space transportation company Arianespace – an organization that owns half of the global market for positioning satellites in geostationary orbit (GTO). Around 10 minutes following launch, and after separation of the first three stages, the Fregat upper stage was ignited and the spacecraft was delivered to an altitude of 175 kilometers – its temporary parking orbit.

The Fregat then fired once more, moving Gaia into transfer orbit. This was followed by separation of Gaia from the upper stage, around 42 minutes after launch. The ESA’s ground control team, situated in Darmstadt, Germany, established ground telemetry and altitude control, before the systems aboard Gaia were activated.

The 2,000 kilogram spacecraft is now on a three-week journey, heading towards its operating post – the gravitationally-stable L2 Lagrange point, some one million miles from Earth.

Following a four-month commissioning period, where all of Gaia’s systems and instruments are monitored and calibrated, the craft will commence its science mission. Lasting a total duration of five years, Gaia will be protected by an insulating sunshield, which extends to over 34 feet in diameter; the sunshield is required to keep its highly sensitive camera cool.

“Gaia promises to build on the legacy of ESA’s first star-mapping mission, Hipparcos, launched in 1989, to reveal the history of the galaxy in which we live… it is down to the expertise of Europe’s space industry and scientific community that this next-generation mission is now well and truly on its way to making ground-breaking discoveries about our Milky Way.”

Ultimately, it is hoped Gaia will provide a highly accurate map of the stars throughout the Milky Way, along with their motions, using its twin telescopes to monitor over 40 million stars each day. According to the ESA, Gaia will successively monitor every target star – around 70 times, over its five-year mission – to establish their “… positions, distances, movements and changes in brightness.” The craft has a billion-pixel camera, and has been billed as the most sensitive telescope ever to have been sent into space.

The spacecraft can use the slight variations in perspective, that occurs as it orbits the sun, throughout each year. Over the entire mission, these subtle changes in viewpoint will allow astronomers to plot the stars’ distances and motions. To achieve this objective, Gaia is fitted with an astrometry instrument (Astro), capable of measuring the angular position of stars of down to magnitude 20; this is 400,000 times fainter than what is perceptible to the naked eye.

Spectrophotometric data will yield information pertaining to the physical properties of each star. It is hoped the blue and red photometer (BP/RP) instrument will provide luminosity measurements that can be used to provide data on the temperature, mass, age and chemical composition of studied stars.

The Radial-Velocity Spectrometer (RVS), meanwhile, will determine the velocity of celestial objects moving towards or away from Gaia. The spacecraft will monitor its stellar candidates by observing the way stars emit light through the Doppler effect. The radial velocities of stars, relative to the sun, is critical to furthering our knowledge of the kinematics of the Galaxy.

The ESA’s director of science and robotic exploration, Alvaro Giménez, recently discussed the importance of generating this “stellar consensus,” claiming Gaia has the potential to also discover new planets, dying stars and asteroids. The community stands to gain unprecedented insight into how the Galaxy functions, with an excess of one million gigabytes of data expected, upon the mission’s conclusion.

Timo Prusti, the ESA’s project scientist for Gaia, summarized his thoughts on the implications of their high-profile mission:

“Along with tens of thousands of other celestial and planetary objects, this vast treasure trove will give us a new view of our cosmic neighbourhood and its history, allowing us to explore the fundamental properties of our Solar System and the Milky Way, and our place in the wider Universe.”

In surveying one billion stars, the ESA hopes Gaia can surpass its predecessor, Hipparcos, which only catalogued 120,000 stars. Excitingly, the spacecraft is also designed to help generate a 3D map of the galaxy, with roughly 40 times the precision of Hipparcos.