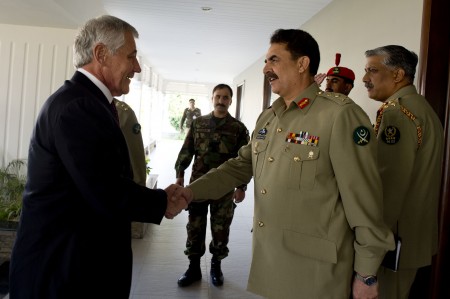 American “do more” mantra as far as Pakistan is concerned was once again reiterated by U.S. Secretary of Defense Chuck Hagel in his meeting withe PM Nawaz Sharif and later with COAS Raheel Sharif in Islamabad. A bit strange because Pakistan is American ally and the front-line state in the war on terror. Stranger still that the same is not demanded of Karzai whom the secretary didn’t even bother to meet during his two-day visit of Afghanistan.

As was expected Islamabad requested the Pentagon Chief to stop the counter-productive drone strikes. Secretary Hagel didn’t give any assurances to Islamabad in this behalf but he emphasized that smooth transfer of NATO supplies must be ensured by the Pakistani government. He added that the aid that Pakistan receives may well be with-held if the NATO supply route is not opened immediately.

The government of PML-N is in a catch 22 situation. It is a situation similar to damn if you do and damn if you don’t. Islamabad as per the policy of the Americans wants to engage the TTP in talks while the CIA operated drone strikes are a big hurdle in this process. The Americans on the one hand want Pakistan to make some headway in bringing the TTP and consequently the Afghan Taliban to the negotiation table but on the other hand are not ready to stop the drone strikes.

In such a situation PM Sharif, though, has assured secretary Hagel that he will personally see to it that the anti-American protests over the NATO supply route in the north-western province of Khyber Pakhtunkhawa (KP) are stopped; in reality he can’t do much, as the province is being run by the opposition Pakistan Tehrik-e-Insaf (PTI). The PTI and its ally the fundamentalist Jamaat-e-Islami (JI) are not ready to call off this blockade unless and until the drone strikes are stopped.

Obama administration is well aware of the situation in Pakistan so its threat to cut-off civil and military aid to Pakistan is something that is difficult to comprehend. The American “do more” mantra has been a regular feature on the agenda of all the U.S. government officials that visit Pakistan from time to time. What really is astounding is that why don’t they seek the same from the Karzai government, especially when Karzai is not willing to sign the BSA and in addition in recent days he is showing major overtures towards Iran.

Since the 9/11 successive Pakistani governments have been the no.1 ally of Americans from day one of its war on terror. The successive governments in Pakistan have towed the American line even at the expense of alienating major portion of its population who believe that Pakistan has been unnecessarily dragged into this conflict. A conflict that has been the cause of crippling the economy of the country ,as well as, one of the major factors in the daily deteriorating law and order situation in the country. In fact, it is because of this war on terror that Pakistan was on the verge of losing the Malakand Division in KP in 2007-2009 to TTP.

After all that Pakistan has been through because of fighting this war on terror on behalf of the Americans instead of being rewarded, time and time again, the U.S. high officials repeat the mantra of “do more” as has Hagel once more on his recent visit.