Iceland: Where They Believe in Elves 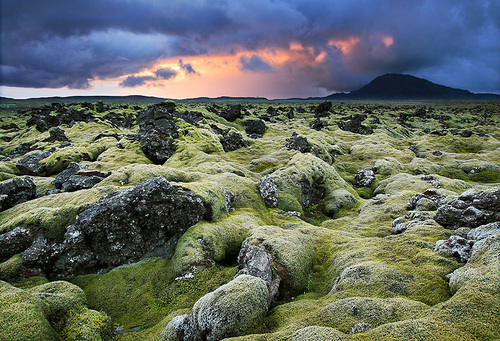 The people of Iceland believe in elves, they really do. Objections to road work projects that have the potential to disturb elf nesting sites are so common that the roads department has a stock response ready to issue. It reads that they will be: “Delaying the construction project at a certain point while the elves living there have supposedly moved on.”

The Supreme Court of Iceland is currently ruling in a case which has brought to a halt a major new highway being built.  The Friends of Lava, elf advocates, went to the Icelandic Road and Coastal Commission to urge them not to go ahead with the new road between Gardabeer, a suburb of Reykjavik, and the Alftanes peninsula. The route runs directly over a site where there is an elf church.  This means, as elf habitat goes, it is of special importance to them, and ought not to be disturbed.

The Friends of Lava have regularly turned out in their hundreds to lay in the path of the bulldozers. As well as trying to protect the “Huldufolk” (hidden people), they have concerns about the overall environmental impact.  A university survey conducted in 2007 with a target group of 1000 found that 62% of Icelanders believed in the existence of elves in their country.

An elf seer who says she can communicate with the hidden people through telepathy, Ragnhildur Jonsdottir, said the road project would be, “a terrible loss and damaging both for the elf world and for us humans.”

Environmentalist Andri Snaet Magnason, admits that, “some feel that the elf thing is a bit annoying.” He is one of those rare Icelanders who is not too sure whether elves exist or not. However, he says he got married in a church with an invisible god supposedly present, so who is he to say belief in elves is irrational.

Iceland’s most famous female, Bjork, was asked in a television interview with US host Stephen Colbert if she and her fellow countrymen believed in elves. “We do” she replied, without a moment’s hesitation. She went on to explain “It’s sort of a relationship with nature, like with the rocks.” It is all about respecting the elves who live in the rocks.

Iceland certainly has a lot of rocks. It is a seething land spouting geysers, bubbling with volcanic activity and featuring vast swathes of petrified lava fields. It is easy to imagine how such a landscape could conjure up visions of different life forms.  Much of Iceland is still pristine wilderness, hardly built on at all, and people have a very close relationship with the land.

Folklore professor at the University of Iceland, Terry Gunnell, thinks the landscape is a big part of the widespread acceptance of elves. Icelanders live in a climate where they can be swept off their feet by the wind; where the smell of sulfur from the tap water reminds them of the fire beneath their feet. He says that people are well aware that their home can be destroyed by something they cannot see, such as an earthquake. Natural wonders abound. The Northern Lights, he notes,“make the sky the biggest television screen in the world” and the glaciers and the hot springs can appear to “talk.”

“Everyone is aware that the land is alive,” says Professor Gunnell, who, like Bjork, thinks this calls for a respect for the land, and a need to work carefully with and around it.

Just as many in the West are telling their children to await the arrival of Santa Claus, the parents of Iceland have been raising their children to the stories of the Yule Lads. These are the 13 trolls who will visit each home in the 13 days that lead up to Christmas.  As in other European countries, the children leave out their shoes.

Each of the Yule Lads has a different role in the annual rituals. Some will leave rewards, and others, punishments. The enticement to be nice and not naughty is therefore just as acute. Pottaskeffil, Pot-Scraper, comes in and eats all the leftovers. Stufur, Stubby, prefers to eat crusts. Then there is Hurdaskellir, the door-slammer, who gets all the children jumping in their beds, slamming doors in the night.

Jonsdottit, the elf-seer, thinks these stories permeate all Icelanders minds, even if they claim not to believe in the elves.  Writer Hilmar Gunnarsson fondly remembers a tale her Grandmother told about a mischievous elf who had borrowed her scissors. She refused to buy a new pair until the elf returned them. She was proven right and the scissors were replaced.

The fact that in this day and age, a major highway construction can be halted by the suspected presence of elves is quite astounding. To the Icelanders who believe in elves it is a vital and important consideration.

11 Responses to "Iceland: Where They Believe in Elves"