India Diplomat Arrested—More to the Story 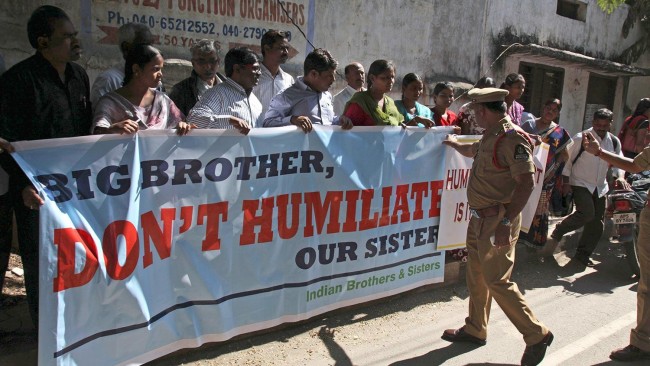 The recent news surrounding the arrest of Devyani Khobragade, a diplomat from India appointed as deputy consul general in New York, has centered on the acerbic response from her home nation’s government. Indian officials were outraged, claiming the treatment of their representative has been “barbaric,” and that they were “shocked and appalled at the manner in which the diplomat had been humiliated,” by U.S. law enforcement. They want to know if there isn’t more to the story.

Khobragade, it has been confirmed, was arrested on charges of visa fraud and the alleged “materially false and fraudulent” presentation of documents made to the U.S. Department of State. The documents were filed to support the employment of an Indian national employee she wished to use as a housekeeper and child care provider in her New York home.

Public sentiment in India is that the arrest was shameful, humiliating, and demeaning. Taken from near her daughter’s school early in the morning, the deputy consul was handcuffed, transported, and processed into the jail’s general population. She was “kept in a cell with drug addicts,” after she was—and this seems to be the crux of the complaints from the majority of news reports—stripped, invasively searched, and subjected to DNA swabbing.

Khobragade was subsequently released on $250,000 bail following a plea of not guilty to the charges. She was required to surrender her passport and faces a 15 year maximum jail sentence if convicted on all counts. India’s reaction has been severe.

It is being reported today by Indian news sources that steps will be taken in response to the perceived shame brought on their nation by the actions. Tow trucks and backhoes have removed concrete defensive barriers from in front of the U.S. embassy in New Delhi.

U.S. officials expressed alarm stating that the roads leading directly to the embassy were now accessible by anyone and that this would present a safety issue for diplomats and the facility. Local New Delhi authorities assured them that police posted in the area would continue to ensure security.

Indian television networks are reporting that the removal of the barriers was just one of a series of retaliatory acts India planned to take. Others would include:

Amazed that the United States has seemingly ignored the accused’s diplomatic immunity, Indian public outcry is calling for greater action.

In an extreme response, a highly ranked official of the Bharatiya Janata Party—India’s largest opposition group which is favored in upcoming elections—urged officials to arrest the domestic partners of homosexual U.S. officials serving in India. This follows a recent Indian Supreme Court ruling that has essentially made homosexuality illegal.

Former Finance Minister Yashwant Sinha said, “The reason why they have arrested this Indian diplomat in New York is a violation of the law of the land in the United States.” Now, he argues, the same sorts of violations are taking place where U.S. officials obtain visas for their same-sex partners.

Citing the Vienna Convention on Consular Relations he suggests that consular officials are afforded immunity from crimes committed in connection with their official duties.

The United States, however, says that Khobragade was not fully immune as the charges were based on allegations of personal misconduct, and not related to her official capacity. Prosecutors in New York say that India’s deputy consul general filed paperwork with the State Department claiming that she paid her live-in nanny $4500 per month but that in reality she paid her below New York’s minimum wage. Additionally, U.S. officials have reviewed the arrest and say they followed standard procedures. Fraudulent filings are the official impetus behind the arrest of the diplomat from India.

This may appear as a simple case of U.S. law enforcement taking issue with an allegedly false payment schedule and arresting the deputy consul from India, but India claims there is more to the story. Trouble had been brewing with Khobragade’s nanny, Sangeeta Richard, since March of this year.

Rediff News reports that in March, some friction between Richard and her employer began over her desire to work outside of the diplomat’s home on her off days. She was informed that according to her visa status, outside work would be illegal.

Three months later in June, Richard is reported to have left Dr. Khobragade’s home to go grocery shopping, but she never returned. Khobragade informed her superiors who then informed local authorities. Her whereabouts were not immediately discovered.

On July 8th, Richard is reported to have visited an immigration attorney’s Manhattan firm soon after which four “individuals” from the consulate also arrived at the law office. Discussions ensued in which Richard demanded an undisclosed sum as her wages as well as a “normal Indian passport.” During these discussions Richard was informed that her family in India—her husband and child—were taken into custody as reported by witnesses. Richard spoke with them and then refused to vacate the offices of the Manhattan law firm. Local police were called and Richard was taken away.

The Indian government revoked Richard’s passport by the end of the day which immediately rendered her status in the United States illegal. India, following contact with officials in Washington, DC, requested the State Department return Richard to her home country.

By September the Indian embassy announced an arrest warrant issued by the metropolitan magistrate in New Delhi, south district court, for Richard’s arrest. The charges put forth in the warrant were extortion, cheating, and conspiracy.  She would be arrested upon her return to India.  Additionally, the New Delhi court issued a restraining order to prevent Richard from instituting actions against her employer emphasizing any grievances about employment terms, salary amounts, or mistreatment should only heard in front of the Indian court.

Richard chose not to surrender herself and to remain in the United States. Official sources suggest that Richard’s leaving her employer six months after her arrival in the U.S. is highly suspicious.

The Indian embassy says it urged Washington to resolve the matter sensitively. They suggested that because the case against Richard had been brought to America’s attention by the Indian Government, and that the status of the deputy consul general was diplomatic, the U.S. government should allow the matter to be handled by India with U.S. cooperation.

The events leading up to the arrest of Dr. Devyani Khobragade are complex. Charges of fraudulent diplomatic filings are taken very seriously by the U.S. State Department. The manner of her arrest, however, considering the Indian government’s stated attempts to resolve the matter before it escalated into a major incident may seem like a snub to the ally nation. The additional considerations of the allegations, and Dr. Khobragade’s diplomatic status, as they are currently being reported in the news media, has many officials in India highly offended. How this affects U.S.-India international relations may be determined by the final outcome of this highly criticized arrest.

As it stands now, U.S. diplomats are already being denied meetings with Indian congressional party members. Reuters reports that Narendra Modi, the candidate for India’s prime ministerial office for the opposition Bharatiya Janata Party as well as Rahul Gandhi, the Nehru-Gandhi family’s scion that leads the ruling Congress party, both declined any meeting with a recent U.S. delegation.

One thing seems clear, though. Both India and the United States, are taking firm positions on the arrest. Tensions are high as India begins to take what it calls “the next steps” necessary to resolve the matter as quickly as possible, while the U.S. stands firmly in defense of its public arrest, strip searching, and incarceration of a foreign official residing in New York City.

The ultimate fate of the deputy consul general of New York, the resulting international consequences of her alleged actions, and the final response by India’s government will be closely watched by the international community.

As details emerge, the world will wait to see if they answer any of the lingering questions surrounding this case. Why the U.S. State Department took action on the diplomat from India for what appears to be a domestic wage dispute has many wondering if there isn’t more to the story.