ISS and How to Spot It in Night Sky

By Kimberly Ruble on December 7, 20132 Comments 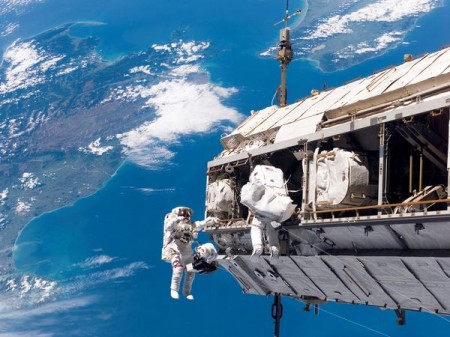 A person may be wondering how to spot the ISS (International Space Station) in the night sky. It really is not that hard if one knows where and when to look.

Very often the ISS is sighted in the blackened sky and individuals have no clue what they are even seeing. To anyone on the Earth who sees it, the ISS can appear to look like a bright star which is moving very fast overhead the horizon. The space station is so shiny that it is able to be seen from the middle of a city. But, just as quickly as it shows up, it is gone. How is someone to know he or she actually caught a glimpse of it?

To help people out, NASA has begun a program which is called Spot the Station. It is set up where individuals from all over the world are able to sign up to get alerts delivered when the ISS will be visible from the location where they live. The alerts are received via text message to a cell phone or by email. Usually, the alerts are sent out about several times a month when the station’s orbit comes near where the person lives who has signed up for the alerts.

Notices are only sent to individuals when the ISS will be plainly visible from their respective locations for at least a few minutes. If one were to live to the north of 51.6 degrees latitude, it would be unlikely for these individuals to receive any notifications because sighting in this area are extremely rare.

When information is sent out, it tells where to look for the ISS in the night sky. Individuals should take note of where the sun has set and it will be much easier to figure out the direction in which the ISS will come from. The ISS’s height is always given in degrees. Everyone should remember that 90 degrees means directly overhead. Any number which measures less than 90 degrees means that the ISS will show up somewhere among the horizon and the 90 degree mark. The ISS shows up so brightly that it is something that is very difficult to miss if one is looking in the right direction. At the present time, over 500,000 people have signed up to get the ISS alerts from NASA’s program.

The first piece of the ISS was sent up into space back in 1998 and it took the original construction of the station over two years until it was finished. Human’s began staying on it on Nov. 2, 2000. Since that time, the ISS has been constantly occupied. There have also been at least 215 individuals who have visited the ISS to date. The space station serves as both a dock for global spacecraft and also an orbiting research lab. The principal countries which work together in keeping the ISS going are the United States, Europe, Russia, Canada and Japan.

If one signs up for the NASA alerts, as the ISS covers the night sky, and increases its mileage,  it may be viewed the next time it passes overhead.