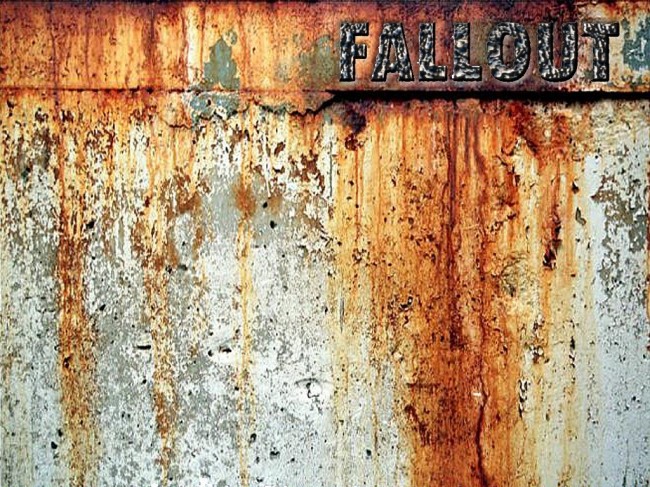 We have finally come to the end of the road, and the Fallout 4 ‘Survivor 2299’ teaser website has now been confirmed a hoax. Along the journey, a number of suspicious pieces of evidence materialized, but blind hope and optimism kept the entire community going. Like the Reddit and Fallout community, we produced a number of articles speculating over evidence, for and against the site’s legitimacy and joining in with the Fallout 4 speculation:

Alas, it has all been for nothing.

Undoubtedly, Survivor 2299 was an incredibly elaborate and well implemented hoax, succeeding in trolling a hopeful community. The site eked out a number of cryptic clues, over the course of a three week period,

Other hoax websites came and went, faked audio tapes were released and radio frequency broadcast transmissions were passed off as the bogus musings of tricksters. Meanwhile, the Office for the Harmonization of the Internal Market (OHIM) discarded a trademark application for Fallout 4. In spite of these events, the steadfast community held together and continued deciphering the Morse code sequences and text ciphers from Survivor 2299.

On Dec. 7, however, the dreams of many were collectively crushed. The developer(s) of Survivor 2299 could continue the rouse, no longer, and elected to come clean. The authors posted a new message, “THAT’S ALL FOLKS,” alongside a YouTube clip of some downbeat violin music.

The remainder of the message read, as follows:

“Remember! don’t [sic] be mad at Bethesda. They are an awesome company. Special thanks to /r/Fallout the most amazing community on Reddit for resolving all clues. PSA: YT User ‘Elevated Level’, Butch, Pitor, Liam Neeson and creator tunnelsnakerule.com are not responsible for this ‘hoax/rickroll’.PPS [sic] To real haters: if you really wish me dead IRL, go there . [sic]”

The creator, who did not feel brave/stupid enough to post his real name or details, then left an e-mail address, with which aggrieved fans could vent their spleen – “[email protected]”

Bethesda in the Bad Books? 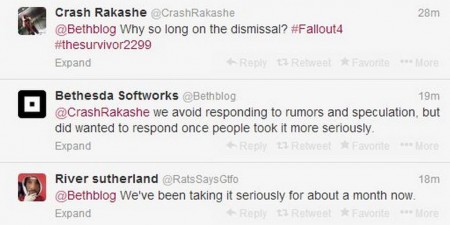 This does, however, raise an interesting question; despite the media frenzy surrounding the occasion, why did Bethesda or ZeniMax fail to pass comment on the authenticity of Survivor 2299? The website had been in operation for several weeks and not once did the Maryland-based company step in and officially denounce the site. However, on Dec. 6, the company did issue the following non-committal statement through Twitter:

“PSA: If you don’t hear it through an official channel like this, assume all rumors and speculation are false.”

Of course, since the site was a teaser, by definition, people were unwilling to adhere to this advice and remained convinced that it was all part of Bethesda’s master plan. 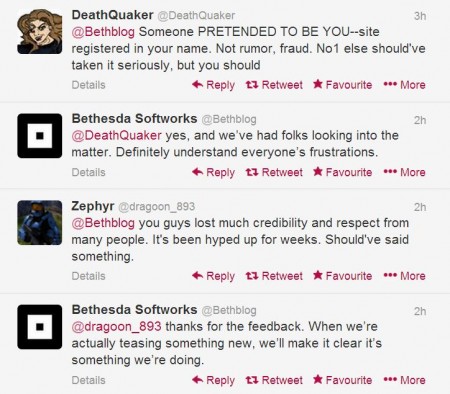 Many disgruntled Fallout fans took to Twitter to ensure Bethesda was well aware of their displeasure. When Crash Rakashe enquired as to why it had taken Bethesda so long to dismiss the site, the company offered weak justification.

Twitter user Zephyr offered his indignant opinions on the latest debacle, criticizing Bethesda for their inactivity:

“You guys lost much credibility and respect from many people. It’s been hyped up for weeks. Should’ve said something.”

In response to this excoriating remark, company officials attempted to quell the fury and discontent of their fans with the promise of “… teasing something new,” in the near future.

Indeed, the press were just as in the dark as the Fallout community. The Las Vegas Guardian Express attempted to seek clarification from Bethesda on four separate occasions, with no response on each try; other news agencies were similarly left in the dark.

Many Redditors made the observation that Bethesda were stocking more and more merchandise, coincidentally, as the Survivor 2299 website continued to churn out cipher after cipher. It should also be noted, the company was involved in offering Black Friday sales discounts, something the Reddit and Fallout community readily lapped up.

Taking into consideration that Survivor 2299 had dramatically increased the interest in Fallout 4, it is quite conceivable that this added publicity could have equated to an increase in sales of Fallout paraphernalia. After having observed the Redditors over the past few weeks, it became clear that the hype was generating an increase in attention for the company’s merchandise range. Indeed, there have been one or two threads, albeit small, talking about Survivor 2299 and its relationship to newly released Fallout merchandise.

“Merchandise: Bethesda has released a number of fallout related items this past week. This could go either way, they are trying to hype up the fallout by sending out more merchandise to go along with a fallout 4 announcement. Or, they are releasing fallout merchandise to take advantage of the free marketing that is coming from the survivor website. Hopefully it is the former but we will see [sic].”

Vice President of Bethesda Softworks Pete Hines, the man entrusted with “public relations and marketing of games,” took to Twitter to defend his position. When Twitterer Matt Gregoire called the company out for not proclaiming Survivor 2299 to be a hoax, Hines issued the following statement:

“@mattyg344 that’s what we tried to do today. We have never talked about or promoted that site”

Whilst Hines’ statement is undeniably true, many Fallout fans have questioned why the company did not use their many channels of communication to definitively state Survivor 2299 to be a fake, over the many weeks it has been running. Likewise, the question could be pitched: when does the omission of a truth become a lie?

Naturally, Redditors, and Fallout fans alike, are feeling disillusioned at the moment – a number of which are convinced of Bethesda’s mea culpa, allowing the rouse to perpetuate unabated for so long. However, something good has come out of the deceit; the community has been brought together. Even now, diehard Fallout fans have taken to the “Disappointment Megathread” to discuss their feelings. Many Redditors also explain how much they enjoyed dissecting the cryptic codes and sharing their thoughts and speculations with fellow enthusiasts.

So, although the Fallout 4 teaser, Survivor 2299, has now been proven an elaborate hoax, at least some good has come of the whole event.